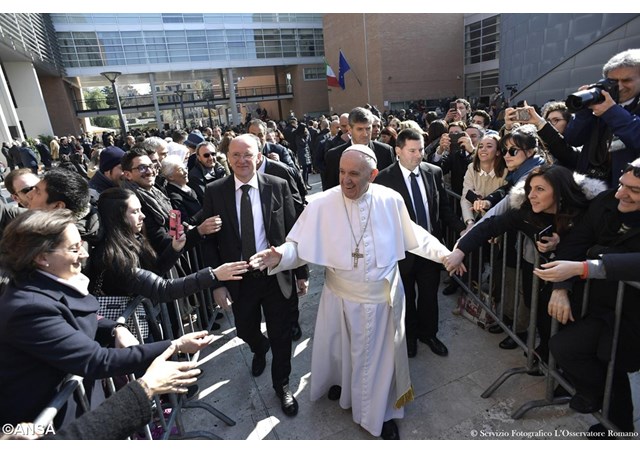 (Vatican Radio) Pope Francis on Friday visited one of Rome’s major institutions of higher education: the  Università degli studi “Roma 3”, which has an enrollment of roughly 40 thousand students.

The Holy Father fielded four questions, each one from a student at a different level of study and in a different department, from post-graduates to married professionals in continuing formation to young undergrads from the business school and the arts and sciences.

One of the students was Nour Essa, a 31 year-old married mother and a refugee from Syria. She came to Rome with her family via Lesbos, making the last leg of her journey with Pope Francis, himself, aboard the Papal plane in 2016.

“I remember a question posed by a reporter on your plane, returning from Lesbos,” she said. “This question was on Europeans’ fear [It. la paura europea] of those coming from Syria or Iraq: do these people not threaten the Christian culture of Europe?”

In his largely off-the-cuff response, Pope Francis said, “Migrations are not a danger, but a challenge to grow.”

Pope Francis also responded to questions of European identity, of the special identity, character, and mission of the city of Rome – and of the duty of the students to the city – as well as of the need for a creative response to overcome a culture of violence, and the need to transform the global culture and become workers of intellectual charity in order to contribute to a constructive renewal of society.

The Pope said that “unity without differences” is one of the great threats in our day. “There is a risk of globalization,” he said, “that fosters uniformity,” and our culture of instant communication and constant connectedness does not allow for thoughtful consideration and could strangle profound dialogue if we are not careful to cultivate a more considerate pace and sensitivity.

Pope Francis also spoke of  the need for young people to cultivate the virtue of hope, the threats against which are many, including joblessness, the blandishments of a culture of hedonism, and the warped sense of religion that can fill the void left when concrete reasons for to hope in a better future appear to be wanting.

“The bitterness of [some young persons’] hearts,” Pope Francis said, “leads to addictions,” or even to suicide. “This lack of work leads to [some of them] to go elsewhere and enlist in a terrorist army,” he said, speculating that perhaps young people who make such a decision think, “at least that way I have something to do and [thus] I give meaning to my life.”