Pope at Mass: ‘May God give us the grace to proclaim an end to wars in world’ 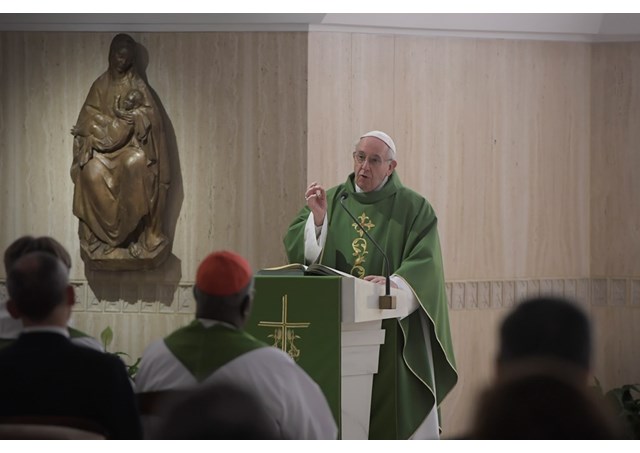 (Vatican Radio)  War begins in a person’s heart, for this reason we are all responsible for caring for peace. This was Pope Francis’ message during his morning Mass at the Casa Santa Marta.

Pope Francis at Mass spoke about the sufferings of so many people whose lives are upset by wars waged by the powerful and arms traffickers.

The dove, the rainbow, and the Covenant. The Holy Father spoke about these three images, present in the day’s First Reading from the Book of Genesis, in which Noah releases a dove after the flood. This dove, which returns with an olive branch, is “a sign of what God desired after the flood: peace, that is, that all would live in peace.” He said, “The dove and the rainbow are fragile. The rainbow is beautiful after a storm, but then a cloud comes and it disappears.” Even the dove, he added, is fragile. The Pope said he was reminded of when at a Sunday Angelus two years ago a seagull swooped in and killed the two doves he and two children had just released from a window of the Apostolic Palace.

People die in wars promoted by the powerful and arms traffickers

Pope Francis said, “The Covenant which God makes is strong, but we accept it in weakness. God makes peace with us but it is not easy to care for peace. It is a daily task, because within each of us is that seed of original sin, that is, the spirit of Cain which – for envy, jealousy, greed, and the desire to dominate – leads to war.” In this way, the Holy Father observed that, when speaking of the Covenant between God and humanity, reference is made to “blood”. As the First Reading states, “For your own lifeblood, too, I will demand an accounting: from every animal I will demand it, and from one man in regard to his fellow man.” We, the Pope said, “are our brothers’ keeper, and when there is blood spilt, there is sin, and God will demand an accounting.”

“In today’s world there is blood being spilt. Today the world is at war. Many brothers and sisters are dying, even innocent people, because the great and powerful want a larger slice of the earth; they want a little more power, or they want to make a little more money on arms trafficking. And the Word of the Lord is clear: ‘For your own lifeblood, that is for your life, I will demand an accounting: from every animal I will demand it, and from one man in regard to his fellow man.’ Even of us –it seems peaceful here – the Lord will demand an accounting of the blood of our brothers and sisters who are suffering war.”

“How do I care for the dove?”, Pope Francis asked himself, “What do I do so that the rainbow is always a guide? What do I do so that more blood is not spilt in the world?” All of us, he said, “we are involved in this.” Prayer for peace “is not a formality; work towards peace is not a formality.” He noted with bitterness that “war begins in the heart of a person; it begins at home, in the family, among friends and then goes out into the whole world.” What do I do, he asked, “when I feel that something enters my heart that wants to destroy peace?”

“War begins in here and finishes out there. The news we see in the papers or on television… Today so many people die, and that seed of war, which breeds envy, jealousy, and greed in my heart, is the same – grown up, become a tree – as the bomb which falls on a hospital, on a school, and kills children. It is the same. The declaration of war begins in here, in each of us. For this reason the question arises: ‘How do I care for peace in my heart, in my interior, and in my family?’. Care for peace; not only care for it but make it with your hands every day. Just so will we succeed in spreading it throughout the whole world.”

The Pope’s childhood memory of the end of the war

Pope Francis said, “The blood of Christ is that which makes peace, but not that blood which I make with my brother or which arms traffickers make, or that of the earth’s powerful in the great wars.”

The Pope then recalled an anecdote from his childhood about peace.

“As I recall, the alarm at the Fire Brigade began to sound, and then those on the television and the city… This usually happened to draw attention to a tragedy or something else. And immediately I heard our neighbor call my mother: ‘Mrs. Regina, come here, come here, come here!’ My mother went out a little afraid: ‘What’s happened?” And the lady from the other side of the garden told her: ‘The war is over!’ and she cried.”