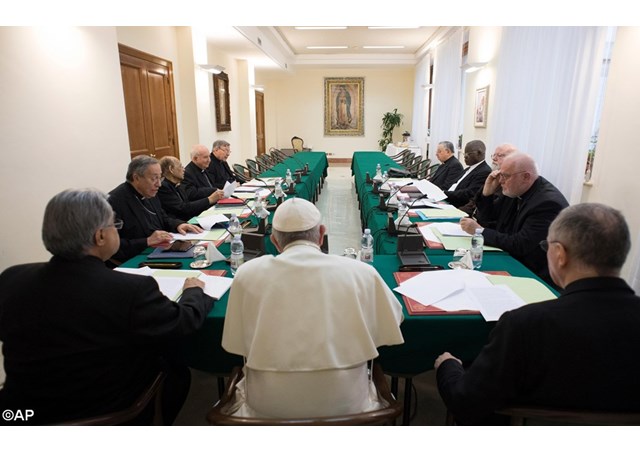 (Vatican Radio) The Vice-director of the Holy See Press Office, Paloma Garcia Ovejero, gave a briefing on Wednesday on the XVIII Meeting of the Cardinal Advisors with Pope Francis.

The Council of Cardinals met together with the Holy Father for three days, Monday through Wednesday, 13-15 February.

Pope Francis was not present for the second part of the morning meeting on Monday, on account of the ad limina visit of the Bishops of Costa Rica; he was absent as well on Wednesday morning because of the weekly General Audience. He will, however, be present at the 105th sitting of the Council set for Wednesday afternoon.

On Monday and Tuesday the Cardinals concelebrated Mass with the Pope.

Following their first meeting on 13 February, the Cardinals released the following statement through the Holy See Press Office:

The Council of Cardinals began its eighteenth session today.

At the beginning, Cardinal Oscar Andrés Rodríguez Maradiaga, coordinator of the group, after greeting the Holy Father, thanked him on behalf of all the Members for his words in the Christmas address to the Roman Curia on 22 December 2016, acknowledging his encouragement and guidance for the work of the Council.

In relation to recent events, the Council of Cardinals pledges its full support for the Pope’s work, assuring him at the same time of its adhesion and loyalty to the figure of the Pope and to his Magisterium.

The working sessions of the Council’s meeting took place each morning from 9:00-12:30, and each afternoon from 16:30-19:00; and were dedicated to further considerations concerning the different Curial Dicasteries. In particular, they continued the discussion on the Congregation for the Evangelization of Peoples (Propaganda Fide); the Congregation for Oriental Churches; and the Pontifical Council for Inter-religious Dialogue.

During the meetings, the Council also studied the process for the selection of candidates to the Episcopate.

Cardinal George Pell reported on his work at the Secretariat for the Economy, entrusted to him, for the full realization of the economic reform requested by the Holy Father, with particular attention to the activity of personal formation and human resources.

The Prefect for the Secretariat for Communications, Msgr Dario Edoardo Viganò, presented the current state of the reform of the communications of the Holy See, or the unification of Vatican Radio and the Vatican Television Centre in the dicastery entrusted to him. Meetings have been initiated with the Secretariat of State, the Secretariat for the Economy, APSA, and the Labour Office to accompany this new phase of the reform. Further, the plan for restructuring Vatican Radio frequencies, and the new policies for the world of social networks were presented. Finally, there was a reflection on the project for the beginning of the reform of the Vatican publishing house, the Libreria Editrice Vaticana.

The next meeting of the Council of Cardinals will take place 24-26 April 2017.