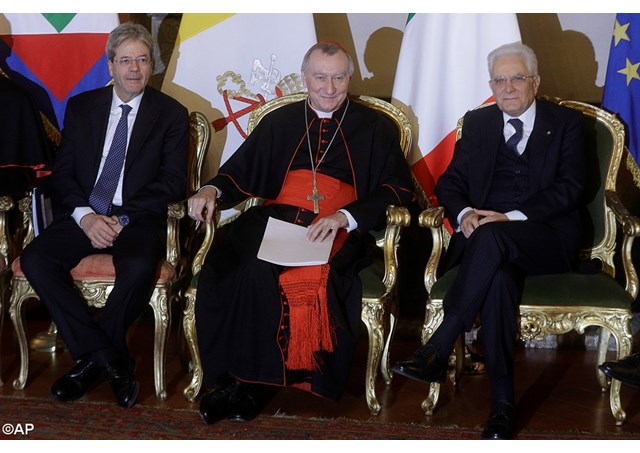 (Vatican Radio) The Vatican Secretary of State, Cardinal Pietro Parolin, on Tuesday evening said the Holy See is “concerned” about the emergence of populism.

The chief Vatican diplomat was speaking after meeting with Italian President Sergio Mattarella, Prime Minister Paolo Gentiloni, and other officials for an annual summit at the Italian Embassy to the Holy See, commemorating the signing of the Lateran Pacts between the Holy See and Italy in 1929.

Cardinal Parolin said closing in on oneself is “never a good policy.”

“The inability to welcome and integrate can be dangerous,” – the Cardinal said – “History teaches us this, and we hope that in this sense it will not be repeated.”

He also said the European project must be “relaunched,” ahead of the 60th anniversary of the signing of the Treaty of Rome in 1957, which created the European Economic Community (ECC), the forerunner of the European Union.

The vote by Great Britain to leave the European Union, as well as the rise of Eurosceptic parties in other countries, has been causing a crisis within European institutions.

“It is obvious there are many tensions, many difficulties, but they are also able to become, as they say, a ‘kairos’ - an opportune moment - to reset the political relationship on a new basis,” the Cardinal said.