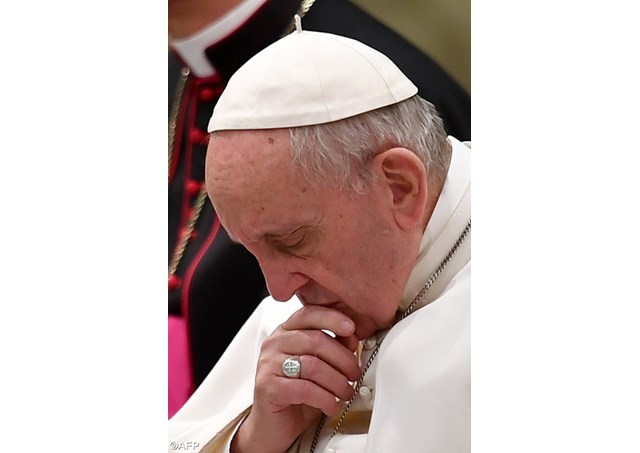 (Vatican Radio) “How can a priest, at the service of Christ and of His Church, come to cause such evil? How can one who has consecrated his life to leading the little ones to God, end up instead devouring them in what I have called a ‘diabolic sacrifice,’ which destroys both the victims and the life of the Church?”

Pope Francis has once again spoken out strongly against the evil of sex abuse perpetrated by clergy and religious. His words come in the preface to a book by a victim of clerical sexual abuse, Daniel Pettit, today a husband and father of six children.

In his preface, the Holy Father describes meeting Mr Pettit at the Vatican during the Year of Consecrated Life. “I couldn’t imagine that this man, enthusiastic and passionate about Christ, was a victim of abuse by a priest,” the Pope writes. “And yet this is what he told me, and his suffering struck me deeply. I saw once more the fearful damage caused by sexual abuse, and the long and painful journey that awaits the victims.” In particular, Pope Francis notes that some victims have even taken their own lives. “These deaths weigh on my heart, on my conscience, and on that of the whole Church,” he says. “To their families I offer my sentiments of love and of sorrow, and I humbly ask forgiveness.”

Pettit’s witness, the Pope says, deals with “an absolute monstrosity, a horrendous sin, radically contrary to all that Christ teaches us.” Pope Francis recalls the Church’s duty to care for and protect the weakest and the most defenceless; and the duty to show proof of “extreme severity towards priests who betray their mission, and towards their hierarchy, Bishops or Cardinals, who protect them.”

And yet despite the sufferings Pettit has undergone, the Pope says, “he has come to see another face of the Church,” which has “allowed him not to lose hope in men and in God. The Pope note that Pettit has met with his “tormentor” – the priest who abused him – has taken his hand, and has forgiven him. He quotes Pettit’s words, “Many people can’t understand that I don’t hate him. I have forgiven him, and I have built my life on that forgiveness.”

Finally, Pope Francis thanks Pettit for his witness, “because testimonies such as his break down the walls of silence that stifled the scandals and the sufferings, and shed light on a terrible area of shadows in the life of the Church,” as well has helping pedophiles “become aware of the terrible consequences of their actions.”