Pope: Catholic educators must teach the grammar of dialogue 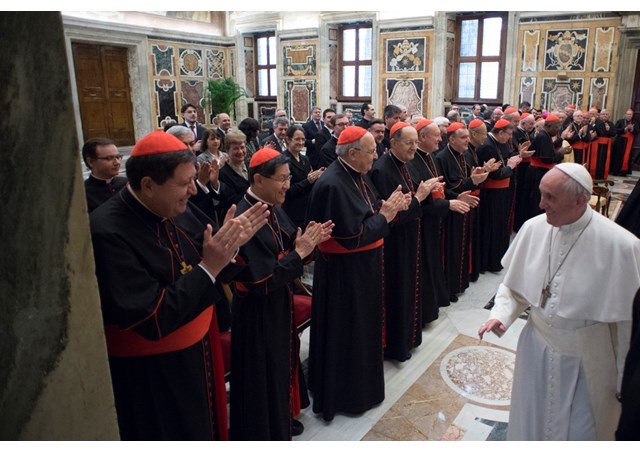 (Vatican Radio) Pope Francis has urged all those involved in Catholic education to be builders of a more united and peaceful world.

In an address on Thursday morning to the Congregation for Catholic Education that is holding its Plenary Assembly, the Pope pointed out that institutes of education have meaning only in relation to the formation of the person.

Thus, he called on all educators to help young people to be builders of a more united and peaceful world.

And, the Pope reminded those present, more than others, Catholic institutions have a mission to offer horizons that are open to transcendence.

“Gravissimum educationis” he recalled highlights the fact that education is at the service of an integral humanism and that the Church, as a mother and an educator, always looks to the younger generation from the perspective of an integral formation of the human person, both in view of his own ultimate goal, and for the good of society of which he is a member.

Pope Francis stressed the need for a culture of dialogue saying our world has become a global village in which each person belongs to humanity and shares in the hope for a better future for the whole family of nations.

Unfortunately, he said, there are many forms of violence, poverty, exploitation, discrimination, marginalization and restrictions on freedom that create a culture of waste.

“Within this context, Catholic educational institutions are called to be on the front line in practicing a grammar of dialogue” which, he said, is the basis of encounter and of the enhancement of cultural and religious diversity.

Dialogue, the Pope said, is constructive when it takes place in an authentic atmosphere of respect, esteem, sincere listening, without the need to blur or mitigate one’s identity.

So it is encouraging, he continued, to hope that the new generations, who are brought up to know how to engage in  Christian dialogue, will leave school and university classrooms with the motivation to build bridges and find new answers to the many challenges of our time.

Referring to the methodology of St. Thomas, the Pope said that in a more specific sense, Catholic schools and universities are called to teach a method of intellectual dialogue which is aimed at revealing the truth.

Concluding, Pope Francis said “there is a final expectation that I would like to share with you: the contribution of education in sowing hope”.

A life that is born, he explained, is the most gushing source of hope; it reaches out in search of beauty, goodness, truth and communion with others for a common growth.

“I am convinced that young people today need above all to lead a life that builds the future” he said.

So educators, Francis pointed out, must listen to young people, something we are preparing to do at  the next Synod of Bishops which is dedicated to them.