Audience: Christian hope is learning to live in expectation 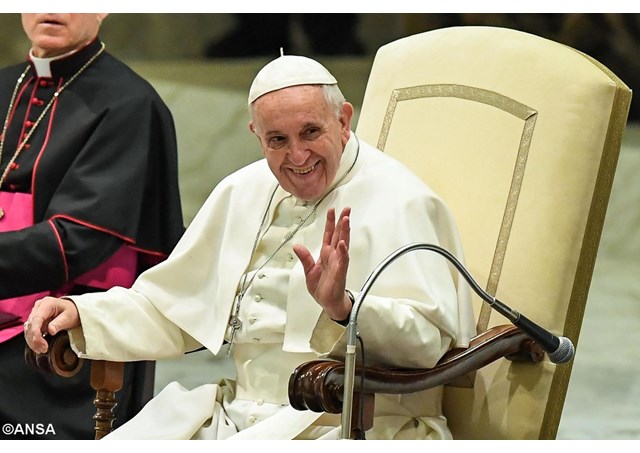 (Vatican Radio) Pope Francis on Wednesday invited Christians to “wear the hope of salvation like a helmet (1 Thess 5:8), in the knowledge that, because Christ is risen, the object of our hope is certain.”

The Holy Father was quoting from Saint Paul’s First Letter to the Thessalonians during his weekly General Audience in the Paul VI Hall where he continued his catechesis on Christian hope.

The Pope recalling the freshness and beauty of this first Christian proclamation described the community of Thessalonica at the time as one “ rooted in faith which celebrated with enthusiasm and joy the resurrection of the Lord Jesus”, despite its difficulties and the many trials.

Pope Francis noted how this letter of St Paul is more timely than ever because, “before the mystery of death, and the loss of our loved ones, we Christians are challenged to hope more firmly in the Lord’s promise of eternal life.”

Christian hope, the Pope continued,  "is the expectation of something that has already been accomplished, and that will certainly be realized for each of us." Giving an example, he spoke of the woman who when realizing she is pregnant, waits every day for the arrival of her baby.

In that same hope, and in the communion of the Church, he added, “we pray too that those who have gone before us will live forever in Christ.”

Concluding his catechesis, Pope Francis said, St. Paul writes: "Jesus died for us so that whether we wake or sleep, we should live together with him". These words, he underlined, “are always a source of great consolation and peace.”

Greeting pilgrims at the end of the audience, the Pope thanked the delegation from the World Catholic Movement for climate for their commitment to caring for our common home at a time of, what he called,  a “serious socio-environmental crisis.”

He also encouraged them to continue to build networks so that 'the local churches respond with determination to the cry of the earth and the cry of the poor. "