Pope Francis: God wants us to be true with Him 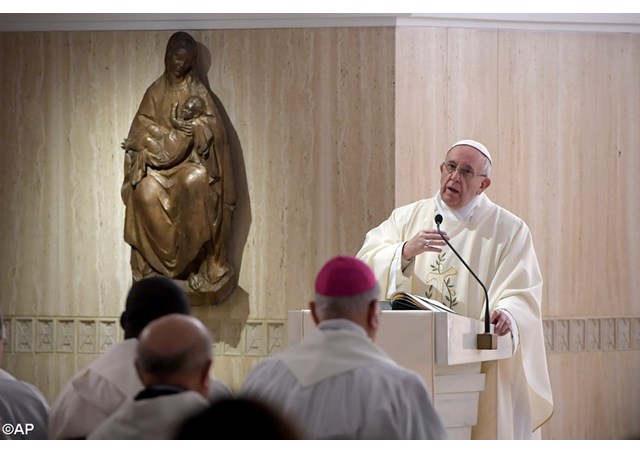 (Vatican Radio)  Pope Francis on Tuesday explained that doing God’s will doesn’t necessarily mean never getting angry with the Lord.

Speaking during morning Mass at Casa Santa Marta the Pope told the faithful that their relationship with God must be a true one so that when we eventually tell him: ‘Here I am!’ it's for real.

Commenting on the reading of the day – the Letter to the Hebrews –  Pope Francis said when Christ came into the world, he said: ‘Sacrifice and offering you did not desire, in burnt offerings and sin offerings you took no delight, Behold: here I am, I have come to do your will, Oh God.’

These words of Jesus, the Pope said, sum up a concatenated history of "here I am," the history of salvation.

After Adam, who hid because he was afraid of the Lord, Pope Francis said, God called and heard the answers of many men and women who said to Him: “Here I am. I am willing”.

The Pope recalled a string of positive responses starting with Abraham, Moses, Elijah, Isaiah, Jeremiah… right up until Mary’s great “Here I am" and the final “Here I am” of Jesus.

It’s a real dialogue, the Pope explained, not just a series of automatic responses because “God speaks to those whom He calls”.

"The Lord is always in dialogue with those whom He invites onto this path (…) And He has a lot of patience, lots of patience” he said.

As an example the Pope referred to the Book of Job which contains a long dialogue between Job - who does not understand - and the Lord who answers his questions and sets him straight.

“At the end, the Pope said, what does Job say to God? “Ah, Lord, You are right: I knew you only by hearsay but now my eyes have seen you: Here I am!”

Christian life, he continued is a string of “Here I am”. It is a continuous wish to do the will of the Lord.

Today's liturgy, Pope Francis said, invites us to reflect on our own way of saying “Here I am” to the Lord.

“Am I going to hide like Adam and not respond? Or, when the Lord calls me, instead of saying ‘Here I am’ or ‘what do you want from me?’ do I run away like Jonah, who did not want to do what the Lord was asking him? Or do I pretend I am doing the Lord’s will, but only superficially, like the  doctors of the law that Jesus condemned because they were pretending; or do I look the other way like the Levite and the priest did before the poor injured man who had been beaten by robbers and left to die… What kind of answer is my answer to the Lord?”

Pointing out that the Lord calls us every day inviting us to say “Here I am”, the Pope said we can “talk” with Him.

“Often people tell me that when they pray they get angry with the Lord...  this too is prayer! The Lord likes it when you tell Him to his face what you are feeling because He is the Father” he said.

Rather than hiding, being fake or looking away, Pope Francis concluded, each of us has a way of saying “Here I am” to the Lord and of doing His will in our lives.

“May the Holy Spirit give us the grace to find the answer” he said.