Pope: Christians are not 'parked' but rather courageous 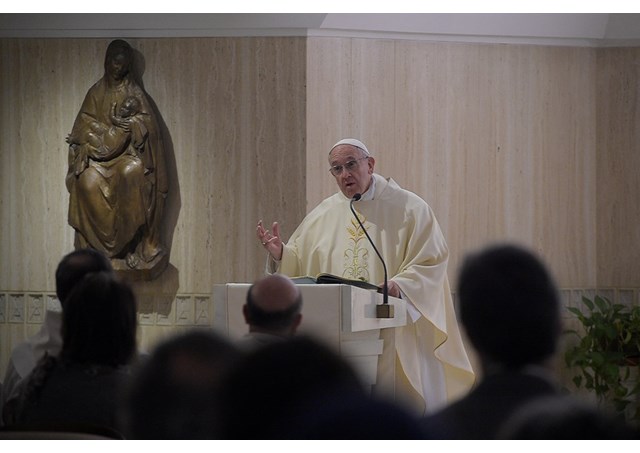 (Vatican Radio) Be courageous Christians, anchored in hope and capable of enduring dark moments. This was the forceful invitation of Pope Francis at the morning Mass on Tuesday at the Casa Santa Marta. Lazy Christians, on the other hand, are stationary, the Pope said, and for them, the Church is a good parking spot.

The life of a Christian is a “courageous life,” Pope Francis said in his homily, which he based on the reading from the Letter to the Hebrews. The zeal spoken of in the reading, the courage to go forward, ought to be our attitude toward life, like the attitude of those who train for victory in the arena. But the Letter also speaks of the laziness that is the opposite of courage. “Living in the fridge,” the Pope summarized, “so that everything stays the same”:

“Lazy Christians, Christians who do not have the will to go forward, Christians who don’t fight to make things change, new things, the things that would do good for everyone, if these things would change. They are lazy, “parked” Christians: they have found in the Church a good place to park. And when I say Christians, I’m talking about laity, priests, bishops… Everyone. But there are parked Christians! For them the Church is a parking place that protects life, and they go forward with all the insurance possible. But these stationary Christians, they make me think of something the grandparents told us as children: beware of still water, that which doesn’t flow, it is the first to go bad.”

Be anchored in hope, and able to endure in difficult moments

What makes Christians courageous is hope, while the “lazy Christians” don’t have hope, they are in retirement, the Pope said. It is beautiful to go into retirement after many years of work, but, he warned, “spending your whole life in retirement is ugly!” Hope, on the other hand, is the anchor that we cling to in order to keep fighting, even in difficult moments:

“This is today’s message: hope, that hope that doesn’t disappoint, that goes beyond. And he [the Author of the Letter to the Hebrews] says: a hope that ‘is a sure and firm anchor for our life.’ Hope is the anchor: We threw it, and we are clinging to the cord, but there, but going there. This is our hope. There’s no thinking: ‘Yes, but, there is heaven, ah, how beautiful, I’m staying…’ No. Hope is struggling, holding onto the rope, in order to arrive there. In the struggle of everyday, hope is a virtue of horizons, not of closure! Perhaps it is the virtue that is least understood, but it is the strongest. Hope: living in hope, living on hope, always looking forward with courage. ‘Yes, Father – anyone of you might say to me – but there are ugly moments, where everything seems dark, what should I do?’ Hold onto the rope, and endure.”

Parked Christians look only at themselves, they are selfish

Finally, Pope Francis invited us to ask ourselves if we are closed Christians, or Christians of the horizons; and if in ugly moments we are capable of enduring, with the knowledge that hope does not disappoint – “Because I know,” he said, “that God does not disappoint”:

“Let us ask ourselves the question: How am I? How is my life of faith? Is it a life of horizons, of hope, of courage, of going forward; or a lukewarm life that doesn’t even know to endure ugly moments? And that the Lord might give us the grace, as we have requested in the Collect [Opening Prayer], to overcome our selfishness, because parked Christians, stationary Christians, are selfish. They look only at themselves, they don’t raise their heads to look at Him. May the Lord give us this grace.”