Pope Francis: Get moving if you want to follow Jesus 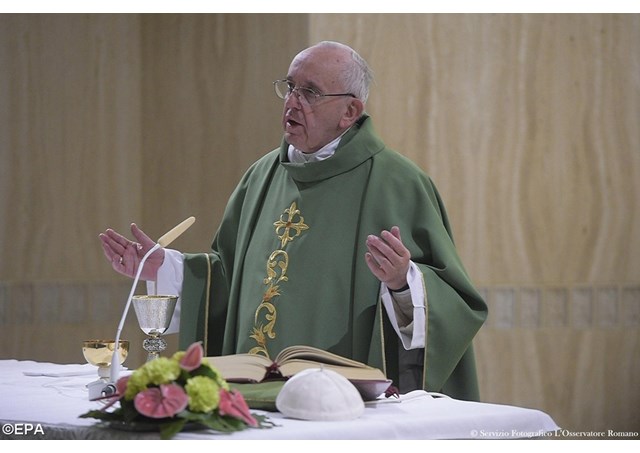 (Vatican Radio)  During his homily on Friday morning in the Chapel of Santa Marta, Pope Francis said that authentic faith must be ready to take risks and that real hope is the reward.

Commenting on the Gospel account of the paralytic who is lowered from the roof of the house where Jesus is teaching, the Pope said people follow Jesus out of self interest or because they are looking for a comforting word. Even if no intention is totally pure or perfect, he said, the important thing is to follow Jesus. People were drawn to Him because of the “things He said and the way he said them. They understood Him. He healed them and many people followed Him to be healed”. There were times, said Pope Francis, when Jesus admonished people who were more interested in their own well-being than in the Word of God.

There were other times, continued the Pope, when people wanted to make Jesus King, thinking He was “the perfect politician!”. But they were wrong and Jesus “went away and hid”. Even so, the Lord let anyone follow Him because He knew that we are all sinners. The bigger problem, confirmed the Pope, “was not with those who followed Jesus”, but with those who stayed where they were.

“Those who didn’t move…and watched. They were sitting down…watching from the balcony. Their life was not a journey: their life was a balcony! From there they never took risks. They just judged. They were pure and wouldn’t get involved. But their judgements were severe. In their hearts they said: What ignorant people! What superstitious people! How often, when we see the piety of simple people, are we too subject to that clericalism that hurts the Church so much”.

Reflecting on those who don’t move in their lives, Pope Francis referenced the man who “sat beside the pool for 38 years, without moving, embittered by life, without hope…someone else who failed to follow Jesus and had no hope”.

But those who did follow Jesus, continued the Pope, were ready to risk in order to meet Him, in order to “find what they wanted”. Going back to the day’s Gospel reading, Pope Francis said “the men who made a hole in the roof took a risk”. They risked the owner of the house suing them and taking them to court to pay for the damages. They were ready to risk because “they wanted to go to Jesus”. The woman who was sick took a risk when she furtively touched the hem of Jesus’ cloak: she risked being ridiculed. But she risked: because she wanted to be cured, “she wanted to reach Jesus. Remember the Canaanite woman: women risk more than men do! That’s true: they are better at it! We have to admit that”.

Following Jesus, the Pope went on, “isn’t easy, but it’s wonderful! And it’s always a risk”. There are times, he said, when we risk “being ridiculous”. But we achieve what counts: “our sins are forgiven”. Beneath whatever request we are making, whether it be for good health or for a solution to a problem, “there’s the desire to be healed in spirit, to be forgiven”. All of us know we are sinners, said Pope Francis, “and that’s why we follow Jesus: to meet Him. So we take risks”.

Beware of a soul that is static, closed and without hope

Let’s ask ourselves, concluded Pope Francis: “Do I take risks, or do I follow Jesus according to the rules of my insurance company?” Because “that’s not the way to follow Jesus. That way you don’t move, like those who judge”.

Do we follow Jesus because we need something, or do we follow Him because we are ready to risk? “This is faith: trusting in Jesus, having faith in Jesus. And with this faith in Him, these men cut a hole in the roof and lowered the stretcher down in front of Jesus so he could cure the sick man”. “Do I put my faith in Jesus?”, asked the Pope. “Do I entrust my life to Jesus? Am I walking behind Jesus even if sometimes I seem ridiculous? Or am I sitting still, watching what others are doing?” Am I watching life with a soul that is static, “with a soul that is closed with bitterness and lack of hope? We should each be asking ourselves these questions today”.