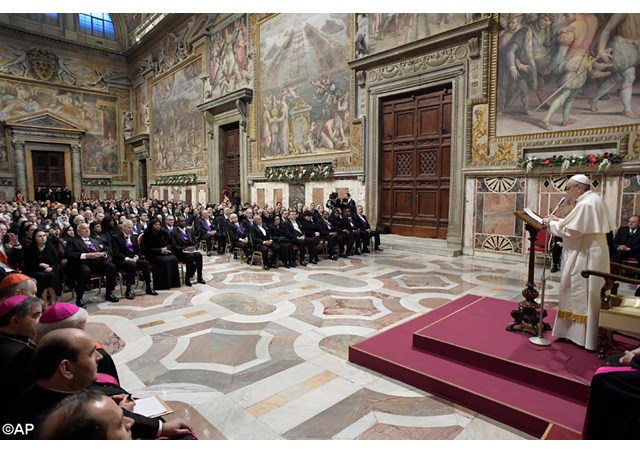 (Vatican Radio) Pope Francis on Monday called on people of every religious tradition to join in condemning the misuse of God’s name to justify acts of violence.

Speaking in the Apostolic Palace to the Diplomatic Corps accredited to the Holy See during the traditional exchange of New Year’s greetings with the diplomats, Pope Francis said, “[O]ne can never kill in God’s name,” adding that the world is, “dealing with a homicidal madness which misuses God’s name in order to disseminate death, in a play for domination and power.”

Pope Francis also said,  “Fundamentalist terrorism is the fruit of a profound spiritual poverty, and often is linked to significant social poverty.”

“It can only be fully defeated with the joint contribution of religious and political leaders,” he continued.

Security and peace were the twin focal points of the Holy Father’s broad-ranging address, which is often described as his "state of the world" address and this year was articulated in some thirty-four paragraphs and twenty footnotes.

“In today’s climate of general apprehension for the present, and uncertainty and anxious concern for the future, I feel it is important to speak a word of hope, which can also indicate a path on which to embark,” the Pope said.

The Holy Father pointed out some of the areas where conflict is affecting people’s lives.

“I think particularly of the fundamentalist-inspired terrorism that in the past year has also reaped numerous victims throughout the world: in Afghanistan, Bangladesh, Belgium, Burkina Faso, Egypt, France, Germany, Jordan, Iraq, Nigeria, Pakistan, the United States of America, Tunisia and Turkey,” he said.

“These are vile acts that use children to kill, as in Nigeria, or target people at prayer, as in the Coptic Cathedral of Cairo, or travelers or workers, as in Brussels, or passers-by in the streets of cities like Nice and Berlin, or simply people celebrating the arrival of the new year, as in Istanbul,” he continued.

The Pope called on the international community to work for peace.

“Peace,” Pope Francis said, is a gift, a challenge and a commitment,” that each of us and all together are called to receive, to answer, and embrace with care and dedication.