Pope Epiphany: Magi personify all who believe and long for God 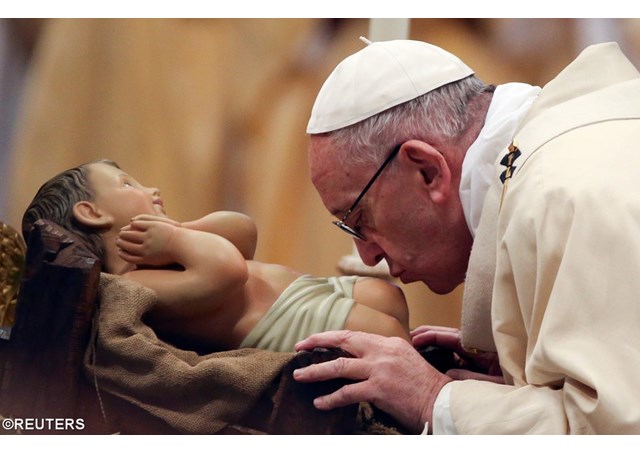 (Vatican Radio) Pope Francis on Friday celebrated Mass for the feast of the Epiphany telling the faithful in St Peter's Basilica the Magi personify all those who believe and long for God.

The 6th of January is synonymous with the Magi who, following a star are led to the Christ child in Bethlehem. And it was next to a manger containing the baby Jesus in St Peter’s Basilica that Pope Francis in his homily spoke about these three Kings who, he said, “personify all those who believe, those who long for God, who yearn for their home, their heavenly homeland.”

They reflect, he added,  “the image of all those who in their lives have not let their hearts become anesthetized.”

Like these kings, the Pope explained, “a holy longing for God helps us keep alert in the face of every attempt to reduce and impoverish our life.  That longing keeps hope alive in the community of believers, which from week to week continues to plead: “Come, Lord Jesus”.”

Longing for God, continued the Holy Father, “has its roots in the past yet does not remain there: it reaches out to the future.  Pope Francis said, “believers who feel this longing are led by faith to seek God, as the Magi did, in the most distant corners of history, for they know that there the Lord awaits them.  They go to the peripheries, to the frontiers, to places not yet evangelized, to encounter their Lord.”

But the Pope noted, “an entirely different attitude reigned in the palace of Herod, … He slept, anesthetized by a cauterized conscience.  He was bewildered, afraid.  It is the bewilderment which, when faced with the newness that revolutionizes history, closes in on itself and its own achievements, its knowledge, its successes.”  A bewilderment, the Holy Father stressed,  “born of fear and foreboding before anything that challenges us, calls into question our certainties and our truths, our ways of clinging to the world and this life.”

The Magi, underlined Pope Francis, “had to discover that what they sought was not in a palace, but elsewhere, both existentially and geographically.  There, in the palace, they did not see the star guiding them to discover a God who wants to be loved.  For only under the banner of freedom, not tyranny, the Pope said, “is it possible to realize that the gaze of this unknown but desired king does not abase, enslave, or imprison us.”

It is a merciful gaze, noted the Pope, that heals, forgives, and comforts those who suffer.

What the Magi found in Bethlehem concluded Pope Francis. “was a promise of newness.  There something new was taking place.  The Magi were able to worship, because they had the courage to set out.  And as they fell to their knees before the small, poor and vulnerable Infant, the unexpected and unknown Child of Bethlehem, they discovered the glory of God.”