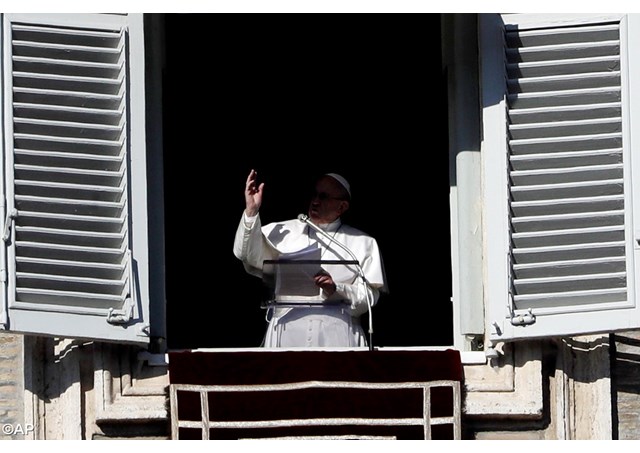 (Vatican Radio)  Pope Francis on Monday called on Christians to “overcome evil with good and hatred with love.”  In a tweet marking the Feast of Saint Stephen, the Church’s first martyr, the Pope said, “let us remember the martyrs of today and yesterday.” It was a theme the Holy Father picked up in his Angelus address to the thousands of pilgrims who had gathered in St. Peter’s Square on this, the day after Christmas.

Here is Vatican Radio's translation of the Pope’s remarks at the Angelus 26 December 2016:

The joy of Christmas also fills our hearts today, as the liturgy has us celebrate the martyrdom of Saint Stephen, the first martyr, inviting us to receive the witness that through his sacrifice he has left us. It is the testimony with which his sacrifice became glorious, precisely the glory of Christian martyrdom, suffered for love of Jesus Christ; martyrdom which continues to be present in the history of the Church, since Stephen up to this day.

Of this witness we are told in today’s Gospel (cf. Mt 10:17-22). Jesus forewarns his disciples of the rejection and persecution that they will encounter and he says this: “and you will be hated by all for my name's sake” (v. 22). But why does the world persecute Christians? The world hates Christians for the same reason it hated Jesus because He brought the light of God and the world prefers the darkness to hide its wicked works. We remember that Jesus himself, at the Last Supper, prayed to the Father to defend him from the spirit of worldly wickedness. There is conflict between the mentality of the Gospel and that of the world. To follow Jesus means to follow his light, which was lit on that Bethlehem night, and to abandon the darkness of the world.

The first martyr Stephen, full of the Holy Spirit, was stoned because he confessed his faith in Jesus Christ, the Son of God. The only Son who comes into  the world invites every believer to choose the path of light and life. This is the meaning of his coming among us. Loving the Lord and obeying his voice, the deacon Stephen chose Christ, Life and Light for every man. By choosing the truth, he became at the same time, the victim of the mystery of evil present in the world. But in Christ, Stephen  triumphed!

Today too the Church, to bear witness to light and truth, experiences harsh persecution in different places, [to the point of] the supreme test of martyrdom. How many of our brothers and sisters in faith suffer abuse, violence, and are hated for Jesus’ sake! I’ll tell you something.  The martyrs of today are greater in number than those of the first centuries. When we read the history of the early centuries, here in Rome, we read about so much cruelty towards Christians.  I tell you, there is this same cruelty today, and in greater numbers with Christians.  Today we want to think about them and to be close to them with our affection, our prayer and our tears. Yesterday, Christmas Day, the persecuted Christians in Iraq celebrated Christmas in their destroyed Cathedral. [Theirs] is an example of fidelity to the Gospel. Despite the trials and the dangers, they bear witness with courage to their belonging to Christ and they live the Gospel committing themselves on behalf of the least, the most overlooked, doing good to all without distinction; they bear witness in this way to charity in truth.

In making space within our heart for the Son of God who gives himself to us at Christmas, we renew the joyous and courageous willingness to follow him faithfully as our only guide, persevering in living in accordance with the Gospel mentality and refusing the mentality of those who dominate this world.

To the Virgin Mary, Mother of God and Queen of Martyrs, we raise our prayer, so that she may guide us and always sustain us in our journey of following Jesus Christ, whom we contemplate in the manger crib and that who is the faithful Witness of God the Father.

After the Angelus, Pope Francis expressed his condolences to the Russian people and the families of victims of the Christmas day plane crash that took the lives of 92 people near Sochi.

I express my sincere condolences for the sad news of the Russian plane that crashed into the Black Sea.  May the Lord console the dear Russian people and the families of the passengers who were on board: journalists, crew and the excellent choir and orchestra of the armed forces.  May the blessed Virgin Mary sustain the search operations underway.  In 2004, the choir performed in the Vatican for the 26th year of the pontificate of Saint John Paul II.  Let us pray for them

in the climate of Christian joy that emanates from the Birth of Jesus, I greet you and thank you for your presence.

To all of you who have come from Italy and from different Nations, I renew my good wishes for peace and serenity: may these, for you and for your family, be days of joy and brotherhood. Greetings and I send best wishes to all of the people named Stephen or Stefanie!

In recent weeks I have received many well-wishing messages from around the world. Not being possible for me to answer each one, I express my heartfelt thanks to all today, especially for the gift of prayer. Thank you so much!  May the Lord reward you with his generosity!

Have a happy feast day! Please do not forget to pray for me. Enjoy your lunch and goodbye.