Pope: ‘Let us allow ourselves to be challenged by the Child in the manger’ 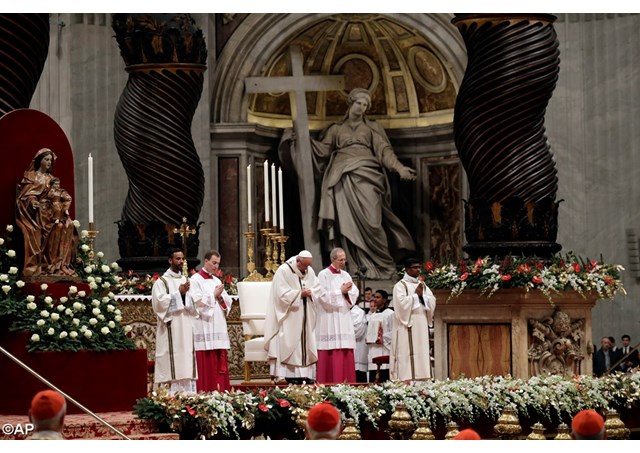 (Vatican Radio) Pope Francis has urged Christians to allow themselves to be challenged by the Child in the manger, and also by the children of today’s world, so many of whom are suffering.

During the Holy Christmas Mass homily, celebrated in St. Peter’s  Basilica on Saturday evening, Christmas Eve, the Pope spoke of those children “who are not lying in a cot caressed with the affection of a mother and father” , of those hiding underground to escape bombardment, of those  on the the bottom of a boat overladen with immigrants.

“Let us allow ourselves to be challenged by the children who are not allowed to be born, by those who cry because no one satiates their hunger, by those who do have not toys in their hands, but rather weapons” he said.

Please find below the official translation of  the full text of Pope Francis’ homily:

It is a night of glory, that glory proclaimed by the angels in Bethlehem and also by us today all over the world.  It is a night of joy, because from this day forth, and for all times, the infinite and eternal God is God with us: he is not far off, we need not search for him in the heavens or in mystical notions; he is close, he is been made man and will never distance himself from our humanity, which he has made his own.  It is a night of light: that light, prophesied by Isaiah (cf. 9:1), which would illumine those who walk in darkness, has appeared and enveloped the shepherds of Bethlehem (cf. Lk 2:9).

The shepherds simply discover that “unto us a child is born” (Is 9:5) and they understand that all this glory, all this joy, all this light converges to one single point, that sign which the angel indicated to them: “you will find a baby wrapped in swaddling clothes and lying in a manger” (Lk 2:12).  This is the enduring sign to find Jesus.  Not just then, but also today.  If we want to celebrate Christmas authentically, we need to contemplate this sign: the fragile simplicity of a small newborn, the meekness of where he lies, the tender affection of the swaddling clothes.  God is there.

With this sign the Gospel reveals a paradox: it speaks of the emperor, the governor, the mighty of those times, but God does not make himself present there; he does not appear in the grand hall of a royal palace, but in the poverty of a stable; not in pomp and show, but in the simplicity of life; not in power, but in a smallness which surprises.  In order to discover him, we need to go there, where he is: we need to bow down, humble ourselves, make ourselves small.  The Child who is born challenges us: he calls us to leave behind fleeting illusions and go to the essence, to renounce our insatiable claims, to abandon our endless dissatisfaction and sadness for something we will never have.  It will help us to leave these things behind in order to rediscover in the simplicity of the God-child, peace, joy and the meaning of life.

Let us allow the Child in the manger to challenge us, but let us also allow ourselves to be challenged by the children of today’s world, who are not lying in a cot caressed with the affection of a mother and father, but rather suffer the squalid “mangers that devour dignity”: hiding underground to escape bombardment, on the pavements of a large city, at the bottom of a boat overladen with immigrants.  Let us allow ourselves to be challenged by the children who are not allowed to be born, by those who cry because no one satiates their hunger, by those who do have not toys in their hands, but rather weapons.

The mystery of Christmas, which is light and joy, questions and unsettles us, because it is at once both a mystery of hope and of sadness.  It bears within itself the taste of sadness, inasmuch as love is not received, and life discarded.  This happened to Joseph and Mary, who found the doors closed, and placed Jesus in a manger, “because there was no place for them in the inn” (v. 7).  Jesus was born rejected by some and regarded by many others with indifference.  Today also the same indifference can exist, when Christmas becomes a feast where the protagonists are ourselves, rather than Jesus; when the lights of commerce cast the light of God into the shadows; when we are concerned for gifts but cold towards those who are marginalized.

Yet Christmas has essentially a flavour of hope because, notwithstanding the darker aspects of our lives, God’s light shines out.  His gentle light does not make us fear; God who is in love with us, draws us to himself with his tenderness, born poor and fragile among us, as one of us.  He is born in Bethlehem, which means “house of bread”.  In this way he seems to tell us that he is born as bread for us; he enters life to give us his life; he comes into our world to give us his love.  He does not come to devour or to command but to nourish and to serve.  Thus there is a direct thread joining the manger and the cross, where Jesus will become bread that is broken: it is the direct thread of love which is given and which saves us, which brings light to our lives, and peace to our hearts.

The shepherds grasped this in that night.  They were among the marginalized of those times.  But no one is marginalized in the sight of God and it was precisely they who were invited to the Nativity.  Those who felt sure of themselves, self-sufficient, were at home with their possessions; the shepherds instead “went with haste” (cf. Lk 2:16).  Let us allow ourselves also to be challenged and convened tonight by Jesus.  Let us go to him with trust, from that area in us we feel to be marginalized, from our own limitations.  Let us touch the tenderness which saves.  Let us draw close to God who draws close to us, let us pause to look upon the crib, and imagine the birth of Jesus: light, peace, utmost poverty, and rejection.  Let us enter into the real Nativity with the shepherds, taking to Jesus all that we are, our alienation, our unhealed wounds.  Then, in Jesus we will enjoy the flavour of the true spirit of Christmas: the beauty of being loved by God.  With Mary and Joseph we pause before the manger, before Jesus who is born as bread for my life.

Contemplating his humble and infinite love, let us say to him: thank you, thank you because you have done all this for me.