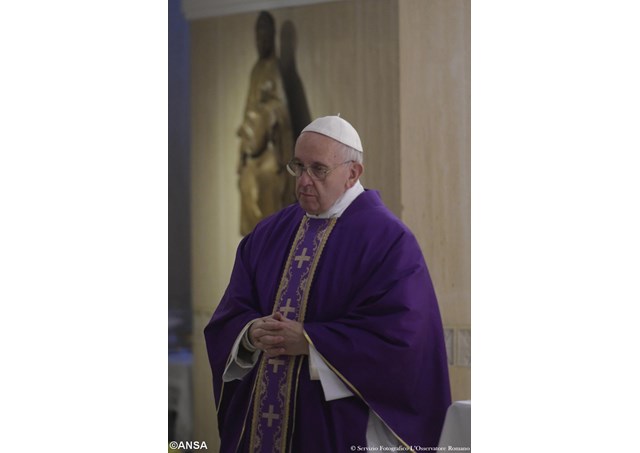 (Vatican Radio) Pastors should speak the truth, but at the same time welcome people for what they are able to give: this is the first step; the rest we leave to the Lord. That was the message of Pope Francis at the daily Mass at the Casa Santa Marta on Thursday.

St John the Baptist was at the centre of the Pope’s homily. The liturgy of Advent, especially in these days, often reflects on his ministry: a man who lived in the desert, preached, and baptized.

Many people went out into the desert to find John the Baptist, including the Pharisees and the doctors of the law. The latter, though, went out with a certain detachment, intending not to be baptized by John, but to judge him. In the Gospel of the Day, Jesus asks the crowds what they went out to see in the desert: “a reed swayed by the wind? Someone dressed in fine garments?” They weren’t looking for men dressed in fine vestments, because people like that are found in the palaces of kings – “or sometimes of Bishops,” the Pope added. Rather, they went out to see a prophet, one who was “more than a prophet.” Jesus said “among those born of women, no one is greater than John.” He was “the last of the prophets,” the Pope said, because after him came the Messiah. Dwelling on the reason of John’s greatness, Pope Francis explained, “He was a man who was faithful to what the Lord had asked of him”; “he was great because he was faithful. This greatness is seen even in his preaching:

He preached forcefully, he said some ugly things to the Pharisees, to the doctors of the law, to the priests, he didn’t say to them: “But dear friends, behave yourselves!” No. He said to them simply: “You race of vipers!” He didn’t use nuance. Because they approached in order to inspect him and to see him, but never with open hearts: “Race of vipers!” He risked his live, yes, but he was faithful. Then to Herod, to his face, he said, “Adulterer! It is not licit for you to live this way, adulterer!” To his face! But it is certain that if a pastor today said in the Sunday homily, “Among you there are some who are a race of vipers, and there are many adulterers,” certainly the Bishop would receive disconcerting letters: “But send away this pastor who insults us.” And he insulted them. Why? Because he was faithful to his vocation and to the truth.

The Baptist asked for a first step from the publicans, and then he baptized them

The Pope noted, though, that with the people he was understanding: of the publicans – who were known as public sinners because they exploited the people – he said, “Do not ask for more than what is just.” “He began with small things. Then we’ll see. And he baptized them,” Francis continued. “First this step. Then we see.” He asked the soldiers, the police, not to threaten or denounce anyone and to be content with their pay. “This means not entering into the world of tangents,” Pope Francis explained. “When a policeman stops you, he tests you for alcohol, there is a little more: ‘Eh, no, but… how much? Come on!’ No. This no.” John baptized all these sinners, “but with this minimal step forward, because he knew that with this step, the Lord would do the rest.” And they converted. “It is a pastor,” the Pope continued, “who understood the situation of the people and helped them to go forward with the Lord.” John was then the only prophet to whom the grace of pointing out Jesus was given.

Even John the Baptist, according to Pope Francis, had his doubts; the great can afford to doubt

Although John was great, strong, secure in his vocation, “he still had dark moments,” he had his doubts,” said Francis. In fact, John began to doubt in prison, even though he had baptized Jesus, “because he was a Saviour that was not as he had imagined him.” And so he sent two of his disciples to ask Him if He was the Messiah. And Jesus corrects the vision of John with a clear response. In fact, He tells them to report to John that “the blind see,” “the deaf hear,” “the dead rise.” “The great can afford to doubt, because they are great,” the Pope said.

The great can afford to doubt, and this is beautiful. They are certain of their vocation but each time the Lord makes them see a new street of the journey, they enter into doubt. ‘But this is not orthodox, this is heretical, this is not the Messiah I expected.’ The devil does this work, and some friend also helps, no? This is the greatness of John, a great one, the last of that band of believers that began with Abraham, that one that preaches conversion, that one that does not use half-words to condemn the proud, that one that at the end of his life is allowed to doubt. And this is a good program of Christian life.”

Helping people take the first step; and God will do the rest

Pope Francis than summarized the main points of his homily: saying the truth and accepting from the people what they are able to give, a first step:

Let us ask from John the grace of apostolic courage to always say things with truth, from pastoral love, to receive the people with the little that they can give, the first step. God will do the rest. And also the grace of doubting. Often times, maybe at the end of life, one can ask, “But is all that I believed true or are they fantasies?” the temptation against the faith, against the Lord. May the great John, who is the least in the kingdom of Heaven, and for this reason is great, help us along this path in the footsteps of the Lord.