Pope: Clericalism distances the people from the Church 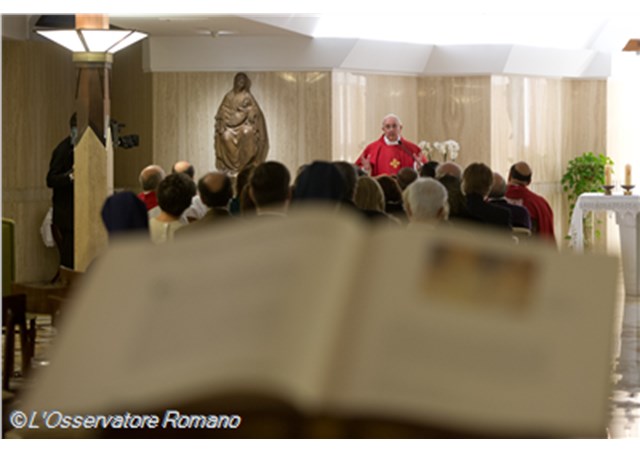 (Vatican Radio) The spirit of clericalism is an evil that is present in the Church today, Pope Francis said, and the victim of this spirit is the people, who feel discarded and abused. That was the Pope’s message in the homily at the morning Mass at the Casa Santa Marta.

Among those taking part in the Mass were the members of the Council of cardinals, who are meeting with the Pope this week in Rome.

In his homily, Pope Francis warned pastors of the dangers of becoming “intellectuals of religion” with a morality far from the Revelation of God.

The poor and humble people who have faith in the Lord are the victims of the “intellectuals of religion,” those who are “seduced by clericalism,” who will be preceded in the Kingdom of Heaven by repentant sinners.

The law of the high priests is far from Revelation

The Pope directed his attention to Jesus, who in the day’s Gospel turns to the chief priests and the elders of the people, and focuses precisely on their role. “They had juridical, moral, religious authority,” he said. “They decided everything.” Annas and Caiaphas, for example, “judged Jesus,” they were the high priests who “decided to kill Lazarus”; Judas, too, went to them to “bargain,” and thus “Jesus was sold.” They arrived at this state of “arrogance and tyranny towards the people,” the Pope said, by instrumentalizing the law:

But a law that they have remade many times: so many times, to the point that they had arrived at 500 commandments. Everything was regulated, everything! A law scientifically constructed, because this people was wise, they understood well. They made all these nuances, no? But it was a law without memory: they had forgotten the First Commandment, which God had given to our father Abraham: “Walk in my presence and be blameless.” They did not walk: they always stopped in their own convictions. They were not blameless!

The people discarded by the intellectuals of religion

And so, the Pope said, they had forgotten the Ten Commandments of Moses”: “With the law they themselves had made – intellectualistic, sophisticated, casuistic – they cancelled the law the Lord had made, they lacked the memory that connects the current moment with Revelation.” In the past their victim was Jesus; in a similar way, now their victim is “the humble and poor people who trust in the Lord,” “those who are discarded,” those who understand repentance even if they do not fulfill the law, and suffer these injustices. They feel “condemned,” and “abused,” the Pope said, by those who are vain, proud, arrogant.” And one who was cast aside by these people, Pope Francis observed, was Judas:

Judas was a traitor, he sinned gravely, eh! He sinned forcefully. But then the Gospel says, “He repented, and went to them to return the money.” And what did they do? “But you were our associate. Be calm… We have the power to forgive you for everything!” No! “Make whatever arrangement you can!” [they said.] “It’s your problem!” And they left him alone: discarded! The poor Judas, a traitor and repentant, was not welcomed by the pastors. Because these people had forgotten what it was to be a pastor. They were the intellectuals of religion, those who had the power, who advanced the catechesis of the people with a morality composed by their own intelligence and not by the revelation.

“A humble people, discarded and beaten by these people.” Even today, the Pope observed, this sometimes happens in the Church. “There is that spirit of clericalism,” he explained: “Clerics feel they are superior, they are far from the people”; they have no time to hear the poor, the suffering, prisoners, the sick”:

The evil of clericalism is a very ugly thing! It is a new edition of these people. And the victim is the same: the poor and humble people that awaits the Lord. The Father has always sought to be close to us: He sent His Son. We are waiting, waiting in joyful expectation, exulting. But the Son didn’t join the game of these people: The Son went with the sick, the poor, the discarded, the publicans, the sinners – and that is scandalous – the prostitutes. Today, too, Jesus says to all of us, and even to those who are seduced by clericalism: “The sinners and the prostitutes will go before you into the Kingdom of Heaven.”