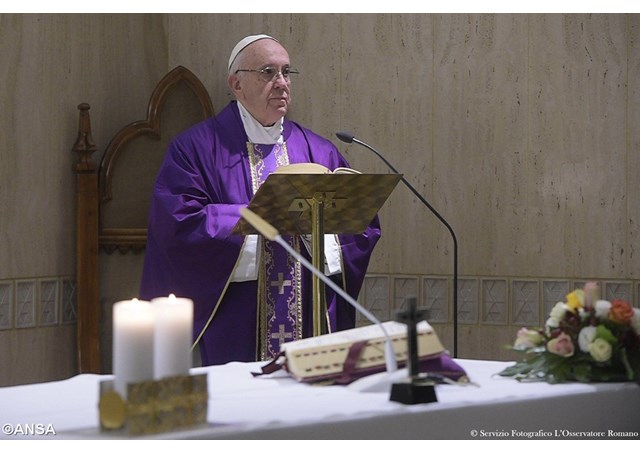 (Vatican Radio) Pope Francis celebrated Mass in the chapel of the Casa Santa Marta on Friday morning, focusing his remarks following the readings of the day on the need for priests to serve as authentic mediators of God’s love, rather than as intermediaries – “go-betweens” or “middle-men” – concerned  only with advancing their own interests.

No to “go-between” priests, yest to priests who are mediators of God’s love

The role of the mediator is not that of the intermediary – and priests are called to be the former for their flock:

“The mediator gives himself (lit. perde se stesso) to unite the parties, he gives his life. That is the price: his life – he pays with his life, his fatigue, his work, so many things, but – in this case the pastor - to unite the flock, to unite people, to bring them to Jesus. The logic of Jesus as mediator is the logic of annihilating oneself. St. Paul in his Letter to the Philippians is clear on this: ‘He annihilated himself, emptied himself, and to achieve this union, [he did so] even unto death, death on a cross. That is the logic: to empty oneself, to annihilate oneself.”

The priest who abandons the task of being a mediator and instead prefers to be an intermediary si unhappy, and soon becomes sad – and he will seek happiness in vaunting himself and making his “authority” felt.

Rigidity brings us to push away people who seek consolation

Jesus had a powerful message for the “go-betweens” of his day, who enjoyed to stroll the squares to be seen:

“But to make themselves important, intermediary priests must take the path of rigidity: often disconnected from the people, they do not know what human suffering is; they forget what they had learned at home, with dad’s work, with mom’s, grandfather’s, grandmother’s, his brothers’ ... They lose these things. They are rigid, [they are] those rigid ones that load upon the faithful so many things that they do not carry [themselves], as Jesus said to the intermediaries of his time: rigidity. [They face] the people of God with a switch in their hand: ‘This cannot be, this cannot be ...’. And so many people approaching, looking for a bit of consolation, a little understanding, are chased away with this rigidity.”

When a rigid, worldly priest becomes a functionary, he ends up making himself ridiculous

“About rigidity and worldliness, it was some time ago that an elderly monsignor of the curia came to me, who works, a normal man, a good man, in love with Jesus – and he told me that he had gone to buy a couple of shirts at Euroclero [the clerical clothing store] and saw a young fellow - he thinks he had not more than 25 years, or a young priest or about to become a priest - before the mirror, with a cape, large, wide, velvet, with a silver chain. He then took the Saturno [wide-brimmed clerical headgear], he put it on and looked himself over. A rigid and worldly one. And that priest – he is wise, that monsignor, very wise - was able to overcome the pain, with a line of healthy humor and added: ‘And it is said that the Church does not allow women priests!’. Thus, does the work that the priest does when he becomes a functionary ends in the ridiculous, always.”

“In the examination of conscience,” Pope Francis said, “consider this: today was I a functionary or a mediator? Did I look after myself, did I look to my own comfort, my own comfort, or did I spend the day in the service of others?” The Pope went on to say, “Once, a person told me how he knew what kind of priest a man was by the attitude they had with children: if they knew how to caress a child, to smile at a child, to play with a child ... It is interesting, that, because it means that they know this means lowering oneself, getting close to the little things.” Rather, said Pope Francis, “the go-between is sad, always with that sad face or the too serious, dark face. The intermediary has the dark eyes, very dark! The mediator is open: the smile, the warmth, the understanding, the caresses.”

In the final part of the homily the Pope then brought three “icons” of “mediator-priests and not intermediaries.” The first is the great Polycarp, who “does not negotiate his vocation and is brave all the way to the pyre, and when the fire is around him, the faithful who were there, they smelled the aroma of bread.”

“This,” he said, is how a mediator makes his end: as a piece of bread for his faithful.” Another icon is St. Francis Xavier, who died young on the beach of Shangchuan, “looking toward China” where he wanted to go but could not because the Lord took him to Himself. And then, the last icon: the elderly St. Paul at the Three Fountains. “Early that morning,” Pope Francis reminded those gathered for Mass, “the soldiers went to him, they got him, and he walked bent over.” He knew that that was because of the treachery of some in the Christian community but he had struggled so much, so much in his life, that he offered himself to the Lord as a sacrifice.”
“Three icons,” he concluded, “that can help us. Look there: how I want to end my life as a priest? As a functionary, as an intermediary, or as a mediator, that is, on the cross?”