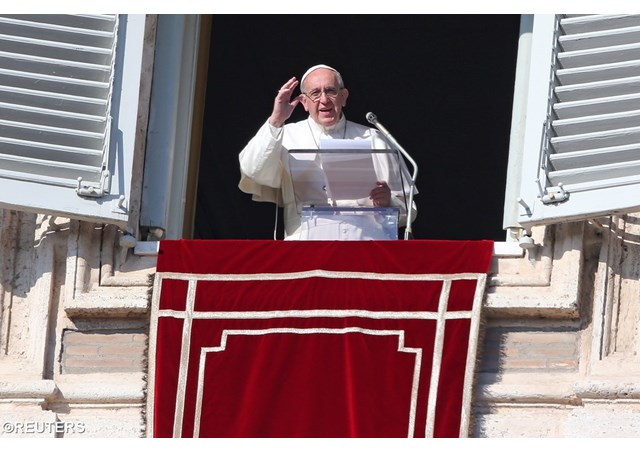 (Vatican Radio) Pope Francis on Thursday encouraged Christians to give their “Yes” to God, which allows the Lord to create for us a “new story,” as opposed to sin, which makes us “old inside.”

The Holy Father was speaking to a crowd of pilgrims in St. Peter's Square before the Angelus on the Solemnity of the Immaculate Conception.

“The readings of the Solemnity of the Immaculate Conception of the Blessed Virgin Mary are two crucial passages in the history of the relationship between man and God:  We might say they lead us to the origins of good and evil,” Pope Francis said.

The Holy Father said the Book of Genesis shows us the origins of sin, the first 'no' to God, when “man preferred to look at himself, not his Creator…and in doing so comes out of communion with God.”

“This makes sin,” – Pope Francis said – “But the Lord does not leave man at the mercy of his evil; He immediately seeks him out and asks a question full of apprehension: 'Where are you?' It is the question of a father or a mother searching for a lost child…and this God does with much patience, in order to bridge the distance which arose at the beginning.”

The Holy Father then turned his attention to the Gospel reading, when “God comes to dwell among us, [and] he becomes man like us.”

“And this was made possible by ‘a great yes,’ that of Mary at the Annunciation,” – the Pope continued – “Through this ‘yes’ Jesus began his way along the road of humanity; it began in Mary, spending the first months of his life within mother’s womb; not appearing already an adult and strong, but by following the entirety of the path of what it means to be human.”

Pope Francis drew attention to the fact Mary is described as “full of grace,” meaning there is “no room for sin…without a shadow of evil.”

He explained Mary’s ‘yes’ is complete and unconditional, without any reservations.

“Also for each of us, there is a story of salvation made of yes and no to God,” – Pope Francis said – “Sometimes, though, we are experts on the half-yes: We are good at pretending not to understand what God wants, and what our conscience prompts us to do. We are also smart, and never give a true no to God, and say: ‘I am not able’, ‘not today, but tomorrow’, ‘Tomorrow I will be better, tomorrow I will pray, tomorrow I will do good.’ Thus we close the door to the good, and evil takes advantage of this ‘yes’ which is lacking.”

“Whereas every full yes to God gives rise to a new story: Saying yes to God is truly ‘original,’ not sin, which makes you old inside,” – the Pope said – “Every yes to God creates stories of salvation for us and for others.”

Pope Francis concluded by saying that in this time of Advent, “God desires to see us and awaits our 'yes'.'"