Pope: "do not resist the grace of conversion" 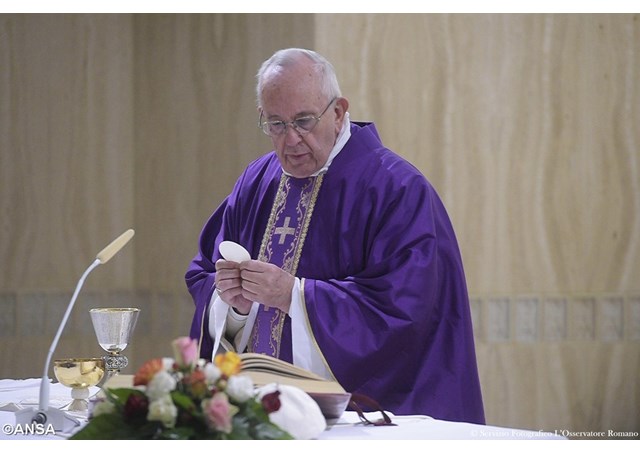 (Vatican Radio) Pope Francis on Thursday encouraged the faithful to ask the Lord for help whenever they feel they may be resisting his grace.

The Pope was speaking during his homily at morning Mass in Casa Santa Marta.

Finding inspiration in the opening prayer of the day “May Your grace conquer the obstacles caused by our sins”, Pope Francis said each of us have obstacles in our hearts which resist God’s grace.

He warned in particular against various types of obstacles [it. resistenze]:

The ones  he called  ‘open obstacles’  that are born of good faith – like in Saul’s case when he resisted grace but was ‘convinced he was doing God’s will' before he was converted by Jesus.

“Open obstacles are healthy” - the Pope said – “in the sense that they are open to the grace of conversion”.

The most ‘dangerous’ obstacles according to Francis are the hidden ones because they do not show themselves. Each of us, he said, have our own way of resisting grace but we must recognize it and allow the Lord to purify us. It’s the type of obstacle that Stephen accused the Doctors of Law of concealing whilst they wanted to appear as though they were in search of the glory of God. An accusation – the Pope said – that cost Stephen his life:

"We all have hidden obstacles; we must ask ourselves what is their nature. They always surface to stop a process of conversion. Always!”

But, the Pope said,  in these cases we must passively and silently allow the process of change to take place.

“Think of when there is a process of change in an institution or in a family. I hear you say: 'But, there are obstacles… (…) Those kinds of obstacles are put there by the devil, to stop the Lord from going ahead.”

Francis then spoke of three types of hidden obstacles:

The obstacle of ‘empty words’ which he illustrated with the example provided by the Gospel reading of the day which reads “Not everyone who says to me, ‘Lord, Lord,’ will enter the Kingdom of heaven;” and by the Parable of the two sons sent by their father to work in the vineyard: the first says ‘no’ and then goes ahead and does the work, while the other says ‘yes’ and then doesn’t go:

Saying yes – the Pope continued – so as not change anything is the ‘resistance of empty words.’

And then, he said, there is the “obstacle of words that justify": that’s when a person constantly justifies himself – he always finds a reason to oppose.

Too many excuses the Pope said do not exude the good “aroma of God”, but the “bad stink of the devil”.

He said a Christian has no need to justify himself: “He is justified by the Word of God". This kind of resistance he explained is a resistance of words which I use “to attempt to justify my position when I do not follow what the Lord is indicating”.

And then, he said, there's the obstacle of "accusatory words": when we accuse others so as not to look to ourselves. In this case too we are ‘resisting’ conversion and grace as illustrated by the Parable of the Pharisee and the publican.

So, Pope Francis concluded, there are not only the great historical actions of resistance as for example the Maginot Line or other such events, but those that "are inside our hearts every day.”

He said the resistance to grace is a good sign "because it shows that the Lord is working in us" and he invited us to make the obstacles fall in order to allow grace in.

Wherever the Lord is there is a cross, the Pope said, be it a small one or a large one, and it is resistance to the Cross, to the Lord, that ultimately brings redemption. So, when there are obstacles we must not be afraid but ask for the Lord’s help and acknowledge that we are all sinners.