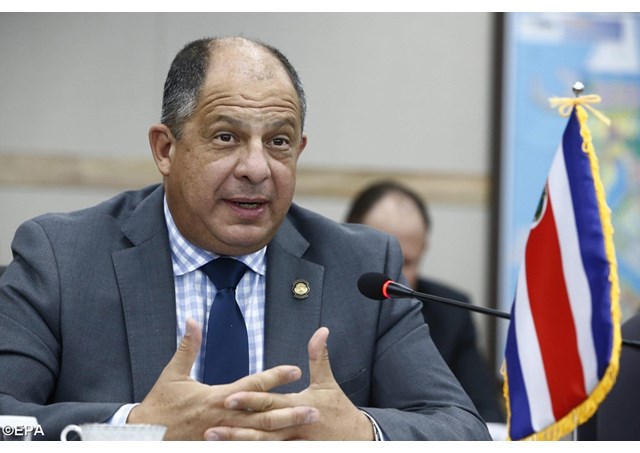 (Vatican Radio) The President of Costa Rica, Luis Guillermo Solís, spoke with Vatican Radio in the wake of Pope Francis’ appeal for prayer and concrete solidarity with all those affected in his country and throughout the region by hurricane Otto, which passed through the southern parts of Central America late last week.

Pope Francis made his appeal during remarks to the faithful gathered for the Angelus prayer on Sunday in St. Peter’s Square.

“The people and the government of Costa Rica have received with great joy the message of His Holiness, Pope Francis, who remembered the difficult times we have endured just a few days ago, as we experienced the passing of hurricane Otto,” President Solís told Vatican Radio.

“The words of the Pope have brought joy,” he explained, “and also a balm of understanding to our people, thousands of whom have been severely affected by this climactic phenomenon.”

Solís went on to say, “We are now in the phase of recuperating: material goods, but most importantly the lives of these thousands of Costa Ricans, who were left without a home [in which] to live, or without any possessions – and in that context, the words of the Pope have become a ray, a beam of light, of hope, for my country [and] my fellow citizens. I would like to convey to His Holiness our word of adhesion, of adherence, of love – and [to] thank him very much for remembering us in his prayers.”

At least nine people were killed by Otto in Costa Rica, as some areas recorded over a month’s worth of rain in just a few hours, forcing the evacuation of more than 5 thousand people. Several towns were completely inundated.

Otto was the southernmost hurricane on record to hit Central America: it made landfall in southern Nicaragua as a category-two storm on Thursday of last week, before losing strength and becoming a tropical storm as it moved into the Pacific. At peak force, Otto had wind speeds of up to 175km/h.

Since the keeping of records began in 1851, Costa Rica had never taken a direct hit from a hurricane.