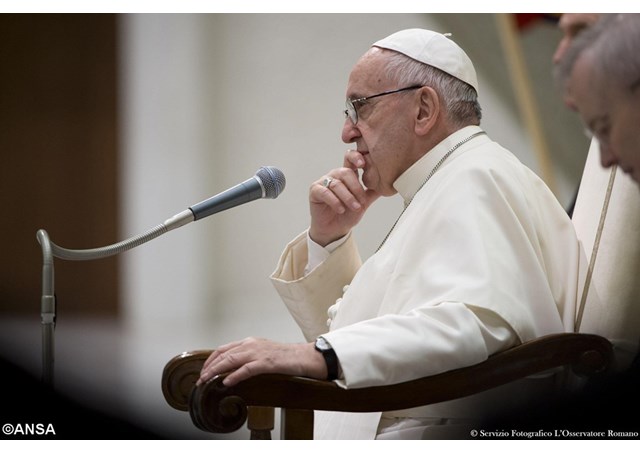 (Vatican Radio) Drug addiction is a ‘new form of slavery’ and a ‘wound in our society’ which should be combatted with education and rehabilitation.

That was Pope Francis’ message to a Vatican conference called ‘Narcotics: Problems and Solutions of this Global Issue’, which was hosted by the Pontifical Academy of Sciences on 23-24 November.

Pope Francis told the two-day conference on Narcotics that those who fall into the snares of drugs are victims who have “lost their freedom” in return for “a new form of slavery”.

Reflecting on the causes of drug addiction, the Holy Father said it results from a variety of factors: “the absence of a family, social pressure, propaganda from traffickers, the desire to live new experiences”.

However, he said, “every addicted person brings with them a distinct personal history, which should be listened to, understood, loved, and, where possible, cured and purified. We cannot fall into the injustice of classifying them as if they were objects or broken junk; rather, every person should be valued and appreciated in their dignity in order to be cured. They continue to have, more than ever, dignity as persons and children of God.”

He said it is no surprise that so many people fall into drug addiction since “mundanity offers us a wide spectrum of possibilities to find a fleeting happiness”.

The Pope went on to approach the problem of narcotics from both the supply and demands sides of the equation.

The supply of drugs, he said, is an “important part of organized crime”, and its supply chain must be rooted out and destroyed.

Demand for narcotics, he said, needs to be halted through education, social programmes, and family support.

He said, “Integral human formation is the priority. It gives people the possibility to possess the instruments of discernment, with which they are able to discern various options and help others. This formation is principally oriented to the most vulnerable of a society, such as children and young people, but which is also usefully extended to families and those who suffer any type of marginalization.” Prevention and rehabilitation, he repeated, are both important aspects of the problem of drug addiction.

In conclusion, Pope Francis said, “The most needy of our brothers and sisters, who seemingly have nothing to give, offer us a treasure – the face of God, which speaks to us and challenges us.”