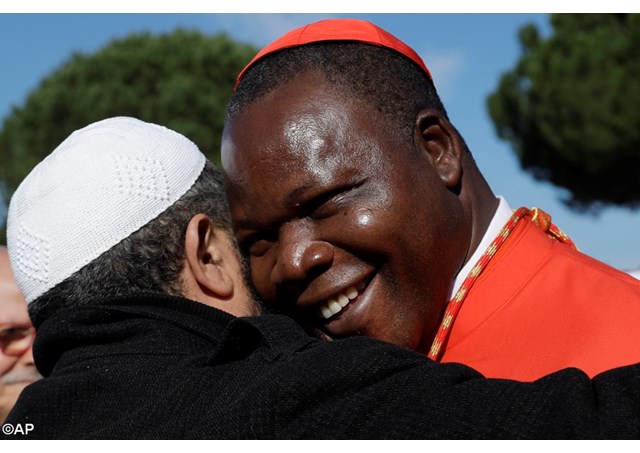 The new Cardinal of the Central African Republic (CAR), Dieudonné Nzapalainga has visited Rome’s Mosque Tuesday in a gesture intended to promote interreligious dialogue between Christians and Muslims. The Archbishop of Bangui was welcomed at the Mosque, by the Italian Islamic Federation Vice President Sekekh Taib and Abdellah Redouane, the Director of the Islamic Cultural Centre of Italy. Accompanying the Cardinal were Imam Kobine Layama and the Evangelical Pastor, Philippe Sing-Na, both of the Central African Republic. The latter were in Rome to escort Cardinal Nzapalainga for the consistory where Pope Francis created him Cardinal.

The visit to Rome’s Mosque, by the Cardinal of CAR, is a sign of the three religious leaders' ongoing commitment to peace and interreligious dialogue. As a result of their efforts, the trio has received various awards commending them for their commitment to reconciliation, dialogue and peace in CAR. Earlier in the week, Cardinal Nzapalainga outlined that as religious leaders in CAR, their motivation for working together was rooted in their faith and belief in the power of dialogue over guns.

"Our strength is speech, not weapons. We want to use it to empower consciences and create a climate of trust,” the Cardinal said.
Last year in November 2015, Cardinal Nzapalainga welcomed Pope Francis, to Bangui for the Holy Father’s Apostolic Visit and the opening of the first Holy Door of Mercy.