Pope: Death is not to be feared if we’re faithful to God 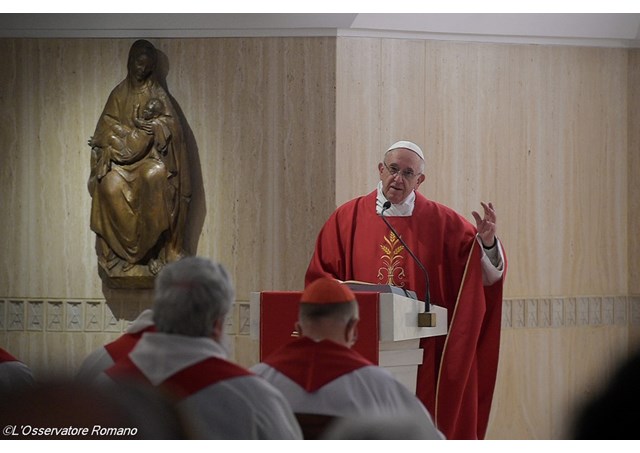 (Vatican Radio) Pope Francis said death is not to be feared if we are faithful to the Lord but warned against being trapped into basing our lives around superficial things that are not transcendent as though we never had to die. He was speaking at his Mass celebrated on Tuesday morning in the chapel of the Santa Marta residence.

Listen to this report by Susy Hodges including clips of the Pope's voice:

Taking his cue from the day’s reading from the book of Revelation, the Pope’s homily focused on the reality of how all of us will face Jesus on the day of judgement. He said a call from the Lord to think about the end of our lives, the end for each of us because all of us will die, comes as the Church heads into the final week of the Liturgical Year. Pope Francis acknowledged that we do not like to think of these things but said this is the reality facing all of us. He then disclosed that he keeps a diary where he writes down when a person dies and each day “I see that anniversary” and I see how time has passed. The Pope said this makes us think about what we’ll leave behind and what will be the trace of our lives and what will be the judgement for each one of us.

“We’d do well to think: ‘But what will the day be like when I will be in front of Jesus? When He asks me about the talents that he gave me, what use I made of them, when He will ask me: how was my heart when the seed was dropped, like a path or like thorns: that Parable of the Kingdom of God. How did I receive His Word? With an open heart?  Did I make it germinate for the good of all or in secret?”

Warning that each one of us will stand in front of Jesus on the day of judgement, Pope Francis quoted from the gospel reading that warns Christians not to be deceived. And the deception being spoken about, he explained, is ‘alienation,’ estrangement, the deception of superficial things that do not have transcendence, the deception of ‘living as though we never had to die.’ When the Lord comes, the Pope asked, “how will he find me?  Waiting for Him or in the midst of the many ‘alienations’ of life?”

“I remember as a child, when we went to catechism we were taught four things: death, judgement, hell or glory.  After the judgement there is this possibility. ‘But Father, this is to frighten us…’ ‘No, this is the truth because if you do not take care of your heart, because the Lord is with you and (if) you always live estranged from the Lord, perhaps there is the danger, the danger of continuing to live estranged in this way from the Lord for eternity.’ And this is a terrible thing!”

Pope Francis concluded his homily by urging his listeners to think about their day of judgement and how they will fare but not to fear that moment because quoting once again from the day’s reading, the Lord tells us, “remain faithful until death and I will give you the crown of life.”

“Fidelity to the Lord does not disappoint. If each one of us is faithful to the Lord, when death comes, we will say like Francis (of Assisi) ‘come sister death…’ we won’t be afraid. And when the day of judgement comes, we will look at the Lord: ‘Lord I have many sins but I have tried to be faithful.’ And our Lord is good.  I give you this advice: ‘be faithful until death – said the Lord - and I will give you the crown of life.’ With this fidelity we won’t be afraid of death, when we die we won’t be afraid of the day of judgement.”