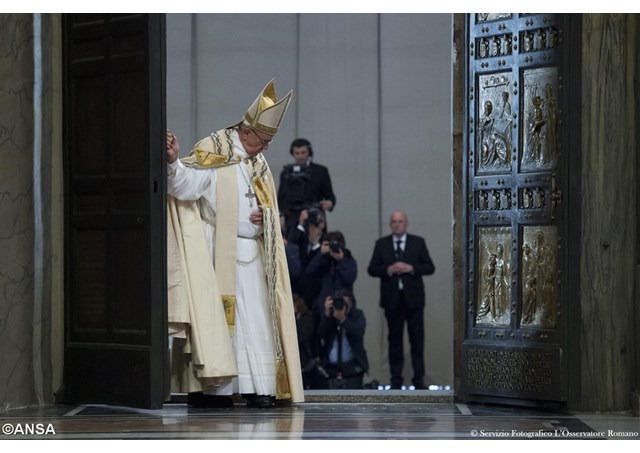 (Vatican Radio) Although the Extraordinary Jubilee Year has concluded, we are still living in a “time of mercy.” That was the message of Pope Francis in a lengthy Apostolic Letter, entitled Misericordia et misera, (“Mercy and Misery”), issued on Monday following the close of the Year of Mercy.

The title refers to the encounter between Jesus and the woman caught in adultery, from the eighth chapter of the Gospel of Saint John. In his commentary on the Gospel, St Augustine said of that encounter, “The two of them” – Jesus and the woman – “remained alone: mercy with misery.” The teaching of this Gospel, the Pope said, “serves not only to throw light on the conclusion of the Extraordinary Jubilee of Mercy, but also to point out the path that we are called to follow in the future.”

In light of the “great graces of mercy” we have received during the Jubilee, our first response is to give thanks to the Lord for His gifts. But in going forward, we must also continue to celebrate mercy, especially in the liturgical celebrations of the Church, including in the Sacrifice of the Mass, and in the other Sacraments, especially in Reconciliation and in Anointing of the Sick, the two “sacraments of healing.”

Pope Francis proposed a number of ideas to continue the celebration of mercy, including an annual day dedicated to making the Scriptures better known and more widely diffused. He also called on the faithful to restore the Sacrament of Reconciliation to a “central place in Christian life.”

The Holy Father also extended a number of initiatives already begun in the Holy Year, asking the Missionaries of Mercy to continue their ministry, and extending indefinitely the faculties of priests of the Society of St Pius X to hear confessions and grant absolution. Pope Francis also extended the faculties of all priests to absolve the sin of procured abortion. “I want to insist as firmly as I can that abortion is a grave sin,” the Pope said, “because it puts an end to an innocent life.” But, he continued, “I can and I must state that there is no sin that God’s mercy cannot reach and wipe away when it finds a repentant heart seeking to be reconciled with the Father.”

Though the Jubilee is closed, Pope Francis said, “the door of mercy of our heart continues to remain wide open.” He called on the faithful to continue to practice new works of mercy, and to find new ways to give expression to the traditional works. The corporal and spiritual works of mercy, he said, “continue in our own day to be proof of mercy’s immense positive influence as a social value.” In this vein, the Pope said the Church must continue to be vigilant and offer solidarity in the face of attacks on human dignity.

As a final initiative for the future, Pope Francis asked the whole Church to celebrate, on the second to last Sunday of the liturgical year, the World Day of the Poor. This Day, he said, “will also represent a genuine form of new evangelization (cf. Mt 11:5) which can renew the face of the Church as she perseveres in her perennial activity of pastoral conversion and witness to mercy.”