Pope Francis to new Cardinals: be living signs of mercy 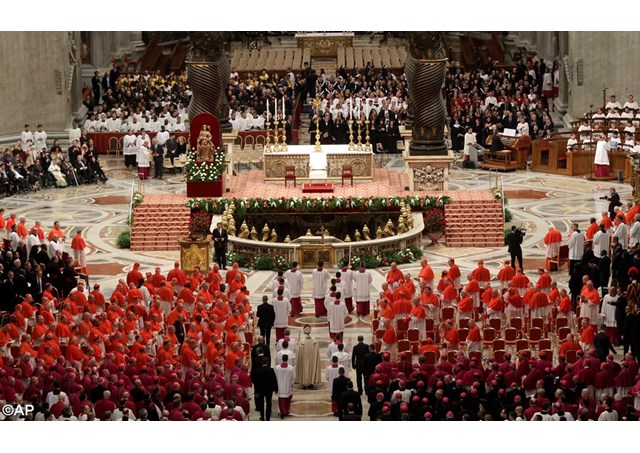 (Vatican Radio) Pope Francis created 17 new Cardinals on Saturday in St. Peter’s Basilica, during an Ordinary Public Consistory he had convoked for that purpose: 13 Cardinal-electors, and four Cardinals above the age of 80, who received the “Red Hat” in recognition of their exemplary service to the Church and witness to the Gospel.

The four Cardinals above the age of 80 years are:

The Holy Father’s allocution took the form of a homily on the reading proclaimed from the Holy Gospel according to St. Luke (6:27-36), which is often referred to as the “Sermon on the Plain” since it recounts the sending of The Twelve “down” from the mountain into the plain to minister to the gathered faithful in their need.

“The Passage,” explained Pope Francis, “also contains four commands or exhortations, which the Lord gives as a way of moulding the Apostles’ vocation through real, everyday situations.” The four commands are: love your enemies; do good to those who hate you; bless those who curse you; pray for those who mistreat you.

“They are four actions that will shape, embody and make tangible the path of discipleship,” said Pope Francis. “We could say that they represent four stages of a mystagogy of mercy,” he continued.

“These are not things we spontaneously do in dealing with people we consider our opponents or enemies. Our first instinctive reaction in such cases is to dismiss, discredit or curse them,” Pope Francis said. “Often we try to ‘demonize’ them, so as to have a ‘sacred’ justification for dismissing them,” he went on to say. “Jesus,” continued Pope Francis, “tells us to do exactly the opposite with our enemies, those who hate us, those who curse us or slander us: we are to love them, to do good to them, to bless them and to pray for them.”

The Holy Father also decried the increasing polarization of the contemporary world, noting how polarization and exclusion are often considered the only way to resolve conflicts, and citing by way of example those among us with the status of a stranger, an immigrant, or a refugee, who too often are considered a threat, or take on the status of an enemy, owing to their provenance from a distant country or their different customs,  or the colour of their skin, their language, their social class, their different way of thinking or even their different faith.

“Without our realizing it,” he said, “this way of thinking becomes part of the way we live and act.  Everything and everyone then begins to savour of animosity.  Little by little, our differences turn into symptoms of hostility, threats and violence.”

Addressing himself directly to the men created Cardinals on the occasion, Pope Francis said, “Today each of you, dear brothers, is asked to cherish in your own heart, and in the heart of the Church, this summons to be merciful like the Father – and to realize that ‘if something should rightly disturb us and trouble our consciences, it is the fact that so many of our brothers and sisters are living without the strength, light and consolation born of friendship with Jesus Christ, without a community of faith to support them, without meaning and a goal in life’ (Evangelii Gaudium, 49).”