Pope to Caritas: reject whatever humiliates and exploits humans 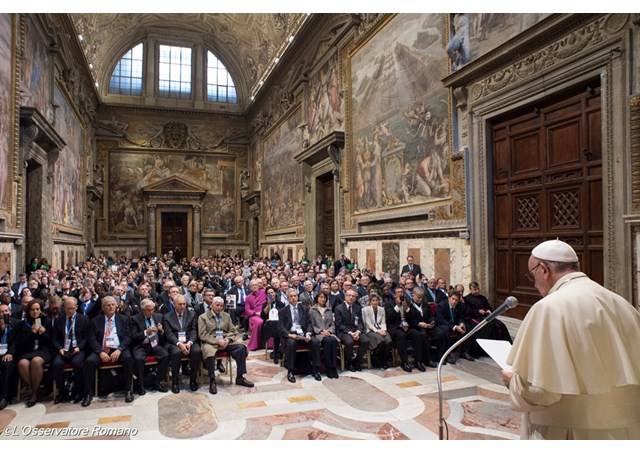 (Vatican Radio) Pope Francis met leading representatives of Caritas on Thursday and urged them to persevere in their fight against poverty and at the same time learn from the poor themselves. The participants at the audience in the Vatican included leading Caritas officials from across the world.

The Pope did not read his prepared remarks, instead handing out the text of his address and speaking off the cuff, followed by a question and answer session with those present.

In his prepared remarks the Pope noted that we are called to act against social exclusion of the weakest and strive for their integration. With our society dominated by the throw-away culture, we need to overcome that indifference and learn the art of solidarity.

Your mission, he went on, is to promote charity and justice in our world in the light of the gospel and the teaching of the Church by involving the poor as the true protagonists of their development.

Stressing it is possible to change things, the Pope said poverty, hunger, illnesses and oppression are not an inevitable misfortune and cannot be considered as permanent situations.

He urged the Caritas representatives to reject everything that humiliates humans and every form of exploitation that degrades people and expressed his joy over an upcoming campaign by Caritas on the subject of migration.

Turning to the issue of peace and reconciliation, Pope Francis urged the Caritas representatives to promote these issues and cooperate in their charitable work with other faith communities who put human dignity at the centre of their mission. In conclusion, he encouraged them both to fight against poverty and at the same time learn from the poor themselves, from their values and their sense of solidarity and sharing with each other.