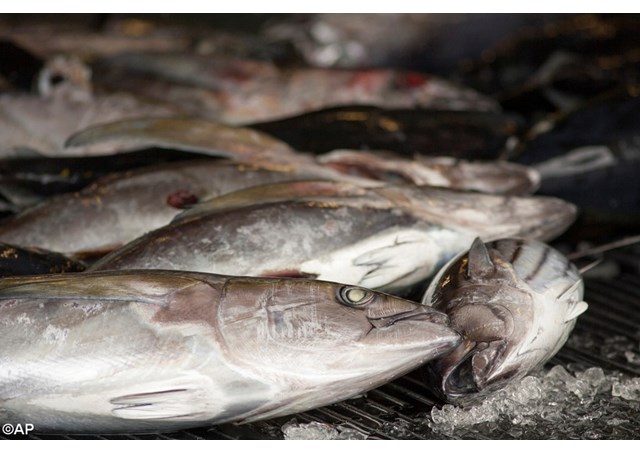 (Vatican Radio) The Pontifical Council for the Pastoral Care of Migrants and Itinerant People has released a Message to mark World Fisheries Day, which is to be celebrated this coming 21st day of November.

Please find the full text of the Message, below

World Fisheries Day since 1998 is celebrated each year on November 21 to highlight the importance of conserving the ocean and marine life that provides food for billions and employment opportunities for over 50 million people worldwide.

Pope Francis in his Encyclical Letter Laudato Sì mentions some of the threats which are affecting and destroying the natural marine resources: “Many of the world’s coral reefs are already barren or in a state of constant decline. “Who turned the wonder world of the seas into under­water cemeteries bereft of colour and life?[1]” This phenomenon is due largely to pollution which reaches the sea as the result of deforesta­tion, agricultural monocultures, industrial waste and destructive fishing methods, especially those using cyanide and dynamite (No. 41)”. Since these are a common patrimony of humanity, Pope Francis calls everyone to:”…cooperate as in­struments of God for the care of creation, each according to his or her own culture, experience, involvements and talents (No. 14)”.

For this reason, we appreciate and wait with expectation for the implementation of The Agreement on Port State Measures to Prevent, Deter and Eliminate Illegal, Unreported and Unregulated Fishing (PSMA), adopted as a FAO Agreement in 2009. After several years of diplomatic efforts finally it went into effect, last June 5, and is now legally binding for the 29 countries and one regional organization which signed it[2]. Through the adoption and implementation of effective port State measures, the PSMA is the first ever-binding international treaty seeking to prevent, deter and eliminate the illegal, unreported and unregulated (IUU) fishing, a major environmental problem which causes great economic damages and threaten food security in many countries[3].

However, our concern is not only for the marine resources. The fishing industry has been widely recognized as one of the most unsafe for the frequency of occupational accidents and high death rates. On this World Fisheries Day we would like to call our attention also on the many fishers which find themselves in situation of exploitation and abuses.

Unfortunately it is not well known the tragic reality that, within the fishing industry, there are hundreds of thousands of internal/transnational migrants who are smuggled/ trafficked for forced labor on board of fishing vessels.

This is favored by a network of criminal organizations and individuals who prey on people coming from situation of poverty, eagerly seeking an employment that could help them to break away from the circle of misery. Instead, they end up in a situation of trafficking, debt bondage and slavery often without a way out. In fact, the fishing vessels stay out at sea for long periods (from a few months to several years), and the victims of these crimes find it difficult, if not impossible, to report their predicaments.

Heeding the call of Pope Francis: ”Human trafficking is a crime against humanity. We must unite our efforts to free the victims and stop this increasingly aggressive crime which threatens not only individuals but the basic values of society and of international security and justice, to say nothing of the economy, and the fabric of the family and our coexistence.[4]”, we as Catholic Church would like to renew our appeal to the Governments to ratify the Work in Fishing Convention, 2007 (No. 188), to create a safe working environment on board of fishing vessels and better welfare provisions for fishers. As of October 2016 the Convention has been ratified by nine coastal states[5], and one more country is necessary for the entry into force of the Convention.

While we express our gratitude to the chaplains and volunteers of the Apostleship of the Sea (AOS) for their dedication and commitment, we would like to call on them to be vigilant and intensify their presence in fishing harbors to identify and rescue victims of human trafficking. It is also necessary that AOS work more closely with leaders of fishing communities to educate and prevent human trafficking by providing viable alternative of employment and live hood.

May Mary Stella Maris continue to be the source of strength and protection to all the fishers and their families.

[1] Catholic Bishops’ Conference of the Philippines, Pastoral Letter What is Happening to our Beautiful Land? (29 Jan­uary 1988).

[3] Illicit  fishing  may account for up to 26 million tonnes of fish a  year,  or more than 15 percent of the world’s total

[4] Address of Pope Francis to the new Ambassadors accredited to the Holy See on the occasion of the presentation of the letters of credence. 12th December 2013