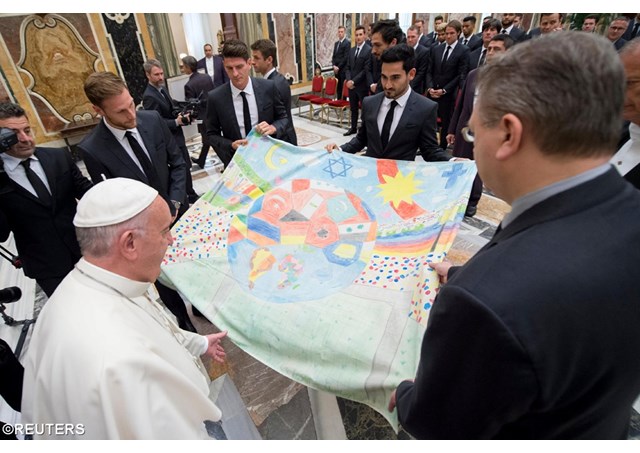 (Vatican Radio) Pope Francis on Monday morning greeted members of the German national football team in the Vatican.  Germany beat San Marino 8-0 on Friday evening in the qualifying stages of their defense of the World Cup.

“I have often heard it said that your victories are team victories,” Pope Francis said, noting the official nickname of the German squad is Die Mannschaft (The Team).

“Truly, competitive sport not only requires a great deal of discipline and personal sacrifice, but also respect for others and team spirit,” – the Pope continued – “This carries you to success as ‘Die Mannschaft ‘ and at the same time causes you to recognize your responsibility on the football pitch, especially to the young people who often see you as role models.  It also causes you to make a mutual commitment to work together to support some important social causes.”

In particular, Pope Francis thanked the team for their support for the Sternsinger (‘Star Singer’) collection at Epiphany, where children from over 10,000 Catholic parishes all over Germany go door-to-door singing carols and collecting money, which is used to help children in poor countries around the world. The initiative was begun in 1959, and is now the world’s largest fundraiser by children, for children.

“This initiative shows how together we can overcome barriers that seem insurmountable, and which penalize needy and marginalized people,” – the Holy Father said – “In this way you contribute to building a more just and united society.”