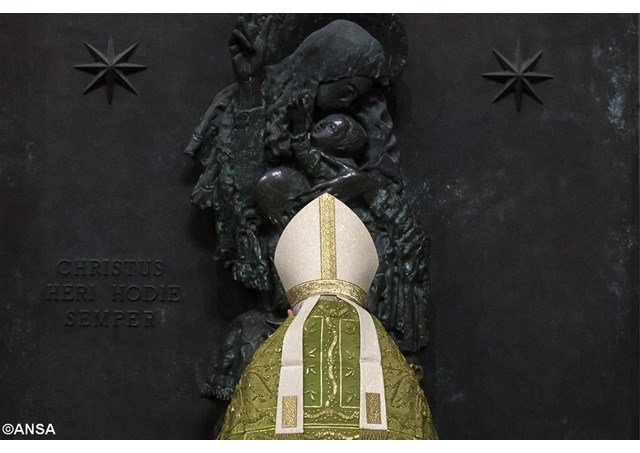 (Vatican Radio) Sunday 13 November saw the celebration of special Masses in churches and basilicas across the world – as well as in Rome’s Papal Basilicas – which included the solemn rite of the closing of the Holy Doors.

That’s with the exception of the Holy Door leading into St. Peter’s Basilica which will be shut by Pope Francis himself on the feast of Christ the King, on Sunday 20 November, as indicated by the Pope himself in the bull announcing the jubilee.

Representing the Pope in the Basilicas of St. John Lateran, St. Mary Major, and St. Paul Outside the Walls were the archpriests of the Basilicas, respectively: Cardinal Agostino Vallini, Cardinal Santos Abril y Castelló and Cardinal James Michael Harvey.

According to Archbishop Rino Fisichella, President of the Pontifical Council for the Promotion of the New Evangelization, it is estimated that 20.4 million people attended Year of Mercy events at the Vatican over the course of this year, many of them crossing the thresholds of the Holy Doors.

The opening of the door symbolically illustrates the concept that pilgrims are offered an “extraordinary path” toward salvation during the time of Jubilee, and walking through the Holy  Door they were able to receive a plenary indulgence.

During his homily for the Mass at St. John Lateran, Cardinal Agostino Vallini spoke about how the Holy Door, just closed, was a visible sign of the Jubilee of Mercy, a year in which we learned “once again” that the fate of the world is not in the hands of men, “but in the mercy of God.”

He said that meditating on God’s mercy this year we have learnt that mercy is not a sign of weakness or surrender, but the “strong, magnanimous,” radiation of the loving omnipotence of the Father, who “heals our weaknesses, raises us from our falls and urges us to do good.”

Cardinal Abril y Castelló pointed out that although the Holy Door is being closed, “God’s door of mercy is always open” and he urged the faithful to be strong in this certainty and become credible witnesses of mercy in the world.

And in his homily, Cardinal Harvey also referred to the solemn closing of the Basilica’s Holy Door saying that “at the same time, we open an inner door to the next stage of our journey of faith, hope and charity”.

During his Angelus address on Sunday Pope Francis also pointed out that Holy Doors were being closed across the world, signaling the end of the Jubilee of Mercy.

“On the one hand, he said, the Holy Year has urged us to keep our eyes fixed on the ultimate fulfillment of God's Kingdom, and on the other, to build a future on earth, working to evangelize the present, so as to make it a time of salvation for all.”

St. Pope John Paul II also held a ‘Great Jubilee’ in the year 2000, marking the 2000th anniversary of Jesus’ birth and the start of the new millennium.