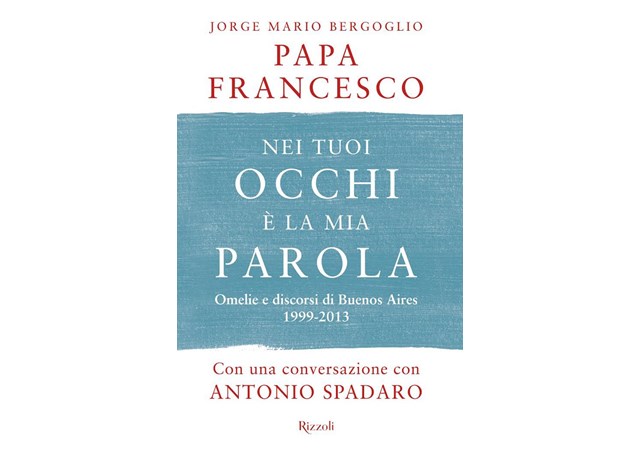 (Vatican Radio) A new book that explores the themes and the content of Pope Francis’ homilies and discourses from when he was archbishop of Buenos Aires was presented on Thursday in the Vatican.

Vatican Secretary of State, Cardinal Pietro Parolin, Cardinal-elect Blase Cupich and the newly elected Superior General of the Jesuits, Fr Arturo Sosa, were present for the presentation together with man behind the book.

Jesuit father Antonio Spadaro, no newcomer to other editorial adventures that feature Pope Francis, is the man who collected the material that makes up the book and edited it giving life to the very first unabridged collection of the writings of Jorge Mario Bergoglio during the 14 years he was archbishop of Buenos Aires.

He explained that its very title which translates loosely into: “In your eyes are my words” speaks of Pope Francis’ need to look people in the eyes when he is talking to them.

Francis – he says – never sees a generic mass or crowd in front of him, nor is he capable of fixing his gaze on a piece of paper he may be reading from without relating personally to the people he is speaking to.

The volume, presented on Thursday at the Jesuit Curia in Rome, is a kind of an ‘opera omnia’ of Bergoglio’s episcopal ministry. Most appropriately, it also features an eye-to-eye conversation between the Pope and Fr. Spadaro about the main themes of Francis’ papacy and about how his personal gestures and choices – right from the very first days of his pontificate – have been molded and charged by his experience as a leader of the flock in Buenos Aires.