Pope Francis calls on us to be instruments of mercy 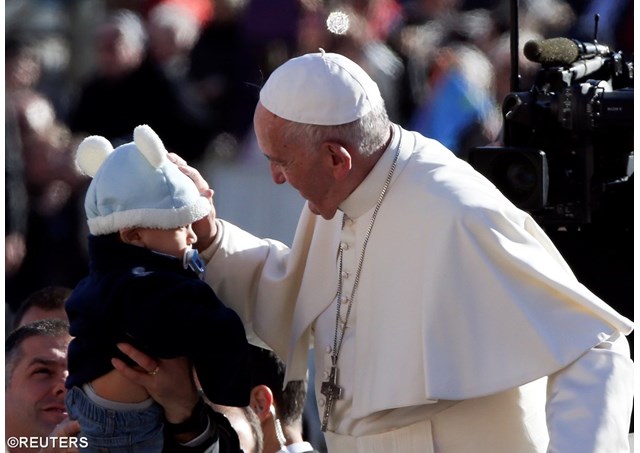 (Vatican Radio)  Pope Francis on Wednesday urged the faithful not to fall into indifference but to become active instruments of mercy.

Addressing the crowd gathered in St. Peter’s Square for the weekly General Audience at a time in which the Holy Year of Mercy is coming to an end, he reflected on the corporal work of mercy that calls us to visit the sick and the imprisoned.

Recalling the many readings from the Scriptures that tell of how, during his life, Jesus incessantly reached out to the other, Pope Francis said: He is our model as we consider the corporal works of mercy that call on us to visit the sick and the imprisoned.

With these works of mercy, he said, the Lord invites us to perform gestures of great humanity.

Sick persons, he said, often feel very alone, and something as simple as a smile, the warm touch of a hand and a little company can prove to be excellent medicine.

Praising those who visit the sick in hospitals, the Pope said their contribution is of inestimable value.

When this kind of work is carried out in the name of the Lord, he explained, it also becomes an eloquent and effective expression of mercy: “Let us not deprive sick persons from obtaining comfort, or ourselves from being enriched by closeness to he who suffers”.

Likewise, the Pope continued, visiting the imprisoned is a fruitful way of bringing the Lord’s healing presence to those who are paying for their mistakes.  Deprived of their freedom, they especially need to hear the message of God’s merciful love and forgiveness, and in this way to recognize their worth and dignity.

“Whatever act a prison inmate may have committed, he remains beloved by God” he said.

“Who can penetrate the intimacy of his conscience and understand what he is feeling? Who can understand his pain and remorse? It is too easy to wash one’s hands of the issue saying ‘he made a mistake’” he said.

As Christians, the Pope said, we are called upon to bring God’s mercy and its redemptive power to our brothers and sisters in need.

Pope Francis also spoke of how he has a special place in his heart for prisoners and recalled that Jesus himself, though innocent, suffered in prison for our sake.

He also mentioned the apostles, Peter and Paul, who used the time of their imprisonment to pray and proclaim the Gospel.

Finally, thinking back to last Sunday’s Jubilee of Prisoners and to his meeting with a group of inmates who told him they wanted to go on to share Saint Paul’s experience with other prisoners, the Pope pointed out that we can all be instruments of God’s mercy with a gesture, a word or a simple visit which, he said, have the power to give back joy and dignity to he or she whose joy and dignity have been taken away.