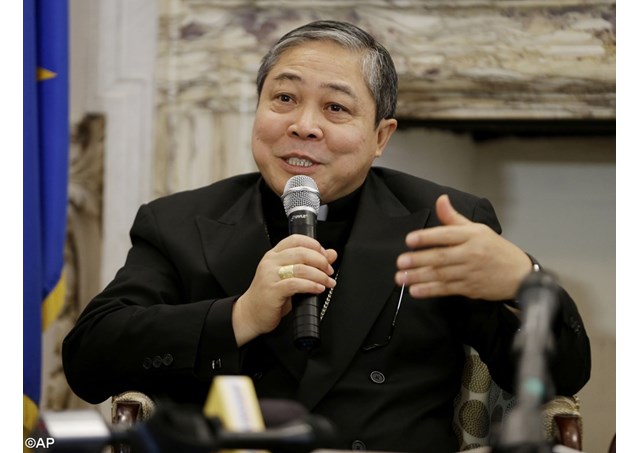 (Vatican Radio) The Holy See’s Permanent Observer to the United Nations, Archbishop Bernardito Auza, told the UN General Assembly the “human rights of every individual, rooted in the innate dignity of the human person, are inviolable, without distinction.”

The Vatican diplomat was speaking during a committee discussion on ‘Elimination Of Racism, Racial Discrimination, Xenophobia And Related Intolerance.’

“This is not only a founding principle of the United Nations Charter and affirmed in the Universal Declaration of Human Rights: it is also enshrined in human experience, and represents an enduring truth that we must not only recognize when convenient but at all times,” Archbishop Auza said.

The full statement can be found below

Last year marked fifty years since the adoption of the International Convention on the Elimination of All Forms of Racial Discrimination. At the time, it was a landmark adoption, signaling the conviction of the international community that racism of any kind cannot be tolerated. However, as we look at the world today, especially in the context of global migration and displacement, we must admit that much of the progress on eliminating racism, racial discrimination, and xenophobia is in serious risk of being eroded, sometimes intentionally.

In this regard, my delegation welcomes the recent report of the Special Rapporteur of the Human Rights Council on contemporary forms of racism, racial discrimination, xenophobia and related intolerance, in which he outlines in stark detail the threat that the spread of extremist political parties, movements and groups in many parts of the world pose to the realization of the peaceful, just and inclusive societies that the Member States of the United Nations have committed themselves to realizing through the implementation of the 2030 Agenda for Sustainable Development and the New York Declaration for Refugees and Migrants.

It is, in particular, a grave cause for concern that, according to the report, there has been a marked increase in the number of racist and xenophobic incidents of violence, especially in the public sphere. This resurgence, in many instances politically motivated, seems to be driven by fear of the other, in particular, the fear in front of our responsibility to care for the marginalized and vulnerable, for those in desperate need of our compassion and solidarity.

This year alone, the United Nations High Commission for Refugees (UNHCR) calculates that, even with still two months left in the calendar year, the number of deaths of refugees and migrants crossing the Mediterranean has already reached a record high. Despite a significant decrease in the number of people seeking to cross the Mediterranean to Europe, the UNHCR reported that 3,740 lives have already been lost in 2016, just short of the 3,771 reported for the whole of 2015

Migrant or resident, human dignity is not negotiable or determined by national laws. The human rights of every individual, rooted in the innate dignity of the human person, are inviolable, without distinction. This is not only a founding principle of the United Nations Charter and affirmed in the Universal Declaration of Human Rights: it is also enshrined in human experience, and represents an enduring truth that we must not only recognize when convenient but at all times. As Pope Francis reminds us, “from this perspective, it is important to view migrants not only on the basis of their status as regular or irregular, but above all as people whose dignity is to be protected and who are capable of contributing to progress and the general welfare. This is especially the case when they responsibly assume their obligations towards those who receive them, gratefully respecting the material and spiritual heritage of the host country, obeying its laws and helping with its needs.”

Alarmed by today’s many manifestations of racial discrimination and other forms of intolerance, the whole human family must reaffirm once more its common determination to fight all forms of discrimination and intolerance as contrary to the dignity and equality inherent in all human beings, and remain resolute to adopt all necessary measures to eliminate them in all their forms and manifestations.