Pope offers Mass for faithful departed on All Souls' Day 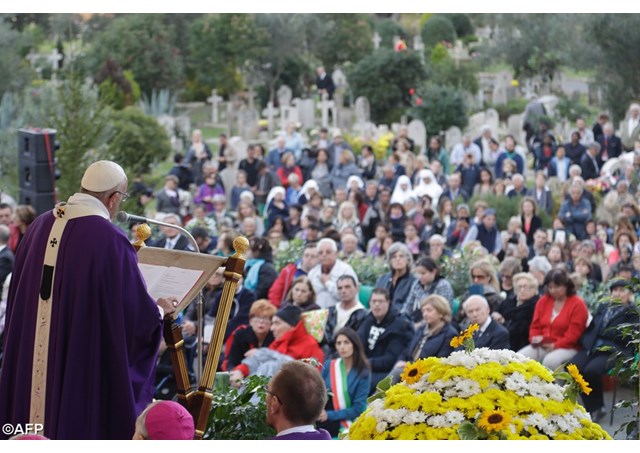 (Vatican Radio) Pope Francis travelled to the Roman cemetery of Prima Porta, where he offered the Holy Sacrifice of the Mass for the liturgical commemoration of All Souls’ Day.

Thousands of people joined the Holy Father as he prayed for the repose of the souls of all the faithful departed. Arriving at the cemetery, Pope Francis visited a mausoleum and laid flowers at several tombs, while praying silently.

In his homily for the Mass, which he delivered off the cuff, the Holy Father reflected on the words of Job: “I know that my Redeemer lives.” The commemoration of the dead, he explained, fills us both with sorrow, a sense of sadness, and with hope. “A cemetery is sad because it reminds us of our loved ones who have died, it reminds us of our future, death.” But, he continued, “in this sadness, we bring flowers as a sign of hope; even, I could say, of a festival – but later, not now.”

This hope, Pope Francis said, can help us, because we too must make the same journey, from this life to the next. The hope in the Resurrection does not disappoint.

In fact it is Jesus Himself who first took this journey; we walk along the path He has trod. “With His Cross,” Pope Francis said, Jesus “has opened the gate of salvation, where we will contemplate God.”

The Flaminio Cemetery in Prima Porta, where Pope Francis said the All Souls’ Day Mass is the largest cemetery in Rome.

Following the ceremony, on his return to the Vatican, Pope Francis was scheduled to visit St Peter’s Basilica for a private prayer for his deceased predecessors in the Petrine office.