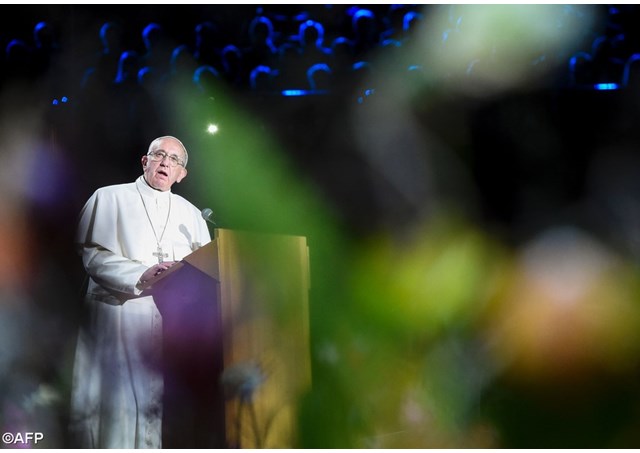 (Vatican Radio) Pope Francis arrived back in Rome on Tuesday afternoon at the conclusion of his 17th Apsotolic journey abroad which took him to the southern Swedish cities of Lund and Malmo. Earlier in the day he celebrated Mass for the local Catholic community, urging them to follow in the footsteps of the saints of the past.

But the two key events of trip took place the previous day, as the Pope joined Lutheran leaders for a common commemoration of the Protestant Reformation that divided Europe five centuries ago.

While we can’t change the past, we can profoundly transform the way we remember it. That’s the message of the joint statement signed in Lund cathedral on Monday by Pope Francis and by Bishop Younan, president of the World Lutheran Federation.

It’s also a theme at the heart of a 2013 Catholic-Lutheran publication called ‘From Conflict to Communion’ which laid the foundation for Monday’s historic events. In six short chapters, the book summarises ways in which historians have looked anew at the Reformation and seen how Luther didn’t want to divide the Church, but rather to reform and clean up what he saw as corrupt, clerical practises. A call that seems strikingly similar to Pope Francis’ denunciation of corruption and clericalism in the Church today. (Perhaps that’s why his critics like to call him ‘the Protestant Pope’).

The roots of this joyful yet poignant common commemoration stretch back over decades of patient, theological dialogue between what one Lutheran leader called ‘the bold prophets’ of the past. Those who worked tirelessly to overcome conflict and division, sometimes at the cost of their own lives.

The divisions of five centuries ago, of course, don’t mean much to the thousands of young people who cheered and sang as their Church leaders entered the packed arena. They’re struggling with the modern conflicts that are still tearing apart communities and taking lives in the Middle East, in Africa, in Asia or in Latin America. Five Catholics and Lutherans, men and women from those different continents spoke publically about the way their faith has given them courage to continue the struggle in the most difficult and dangerous circumstances. The Pope and the Lutheran president thanked them for their examples of commitment and service to those most in need.

Both the prayer service in the cathedral and the public event in the arena were moving and uplifting occasions – described by Bishop Younan as “a modern miracle of the Holy Spirit” who touched the hearts of the first disciples two thousand years ago in his native Jerusalem.

So do these events mean that Christian unity is just around the corner? That differences around our visions of Church, Eucharist and Ministry are suddenly overcome? That new arguments over women’s ordination or same-sex relationships are no longer important? No, these old and new issues will require the patient, unglamorous work of theologians for many years to come. But I do believe that Monday’s events model a new way of working together,  a new style of engaging with differences and a new sense of shared Christian service, so desperately needed in today’s divided and suffering world.