Pope urges Catholics and Lutherans to recognize past errors 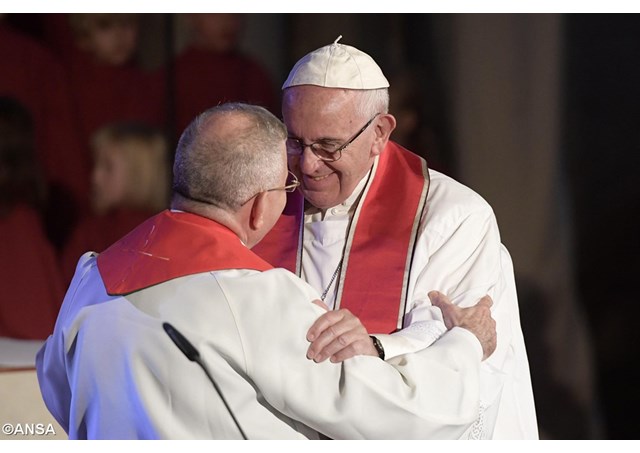 (Vatican Radio) Pope Francis on Monday urged Catholics and Lutherans to recognize past “errors” and seize "the opportunity to mend a critical moment of our history by moving beyond the controversies and disagreement that have often prevented us from understanding one another." He said the division between Catholics and Lutherans was “perpetuated historically by the powerful of this world” rather than by the faithful people of God. The Pope was speaking during his homily at an ecumenical prayer service in the Lutheran Cathedral of Lund shortly after his arrival in Sweden for a 26-hour pastoral visit.

Please find below an English transcript of the Pope’s prepared homily during the prayer service:

“Abide in me as I abide in you” (Jn 15:4).  These words, spoken by Jesus at the Last Supper, allow us to peer into the heart of Christ just before his ultimate sacrifice on the cross.  We can feel his heart beating with love for us and his desire for the unity of all who believe in him.  He tells us that he is the true vine and that we are the branches, that just as he is one with the Father, so we must be one with him if we wish to bear fruit.

Here in Lund, at this prayer service, we wish to manifest our shared desire to remain one with Christ, so that we may have life.  We ask him, “Lord, help us by your grace to be more closely united to you and thus, together, to bear a more effective witness of faith, hope and love”.  This is also a moment to thank God for the efforts of our many brothers and sisters from different ecclesial communities who refused to be resigned to division, but instead kept alive the hope of reconciliation among all who believe in the one Lord.

As Catholics and Lutherans, we have undertaken a common journey of reconciliation.  Now, in the context of the commemoration of the Reformation of 1517, we have a new opportunity to accept a common path, one that has taken shape over the past fifty years in the ecumenical dialogue between the Lutheran World Federation and the Catholic Church.  Nor can we be resigned to the division and distance that our separation has created between us.  We have the opportunity to mend a critical moment of our history by moving beyond the controversies and disagreements that have often prevented us from understanding one another.

Jesus tells us that the Father is the “vinedresser” (cf. v. 1) who tends and prunes the vine in order to make it bear more fruit (cf. v. 2).  The Father is constantly concerned for our relationship with Jesus, to see if we are truly one with him (cf. v. 4).  He watches over us, and his gaze of love inspires us to purify our past and to work in the present to bring about the future of unity that he so greatly desires.

We too must look with love and honesty at our past, recognizing error and seeking forgiveness, for God alone is our judge.  We ought to recognize with the same honesty and love that our division distanced us from the primordial intuition of God’s people, who naturally yearn to be one, and that it was perpetuated historically by the powerful of this world rather than the faithful people, which always and everywhere needs to be guided surely and lovingly by its Good Shepherd.  Certainly, there was a sincere will on the part of both sides to profess and uphold the true faith, but at the same time we realize that we closed in on ourselves out of fear or bias with regard to the faith which others profess with a different accent and language.  As Pope John Paul II said, “We must not allow ourselves to be guided by the intention of setting ourselves up as judges of history but solely by the motive of understanding better what happened and of becoming messengers of truth” (Letter to Cardinal Johannes Willebrands, President of the Secretariat for Christian Unity, 31 October 1983).  God is the vinedresser, who with immense love tends and protects the vine; let us be moved by his watchful gaze.  The one thing he desires is for us to abide like living branches in his Son Jesus.  With this new look at the past, we do not claim to realize an impracticable correction of what took place, but “to tell that history differently” (LUTHERAN-ROMAN CATHOLIC COMMISSION ON UNITY, From Conflict to Communion, 17 June 2013, 16).

Jesus reminds us: “Apart from me, you can do nothing” (v. 5).  He is the one who sustains us and spurs us on to find ways to make our unity ever more visible.  Certainly, our separation has been an immense source of suffering and misunderstanding, yet it has also led us to recognize honestly that without him we can do nothing; in this way it has enabled us to understand better some aspects of our faith.  With gratitude we acknowledge that the Reformation helped give greater centrality to sacred Scripture in the Church’s life.  Through shared hearing of the word of God in the Scriptures, important steps forward have been taken in the dialogue between the Catholic Church and the Lutheran World Federation, whose fiftieth anniversary we are presently celebrating.  Let us ask the Lord that his word may keep us united, for it is a source of nourishment and life; without its inspiration we can do nothing.

The spiritual experience of Martin Luther challenges us to remember that apart from God we can do nothing.  “How can I get a propitious God?”  This is the question that haunted Luther.  In effect, the question of a just relationship with God is the decisive question for our lives.  As we know, Luther encountered that propitious God in the Good News of Jesus, incarnate, dead and risen.  With the concept “by grace alone”, he reminds us that God always takes the initiative, prior to any human response, even as he seeks to awaken that response.  The doctrine of justification thus expresses the essence of human existence before God.

Jesus intercedes for us as our mediator before the Father; he asks him that his disciples may be one, “so that the world may believe” (Jn 17:21).  This is what comforts us and inspires us to be one with Jesus, and thus to pray: “Grant us the gift of unity, so that the world may believe in the power of your mercy”.  This is the testimony the world expects from us.  We Christians will be credible witnesses of mercy to the extent that forgiveness, renewal and reconciliation are daily experienced in our midst.  Together we can proclaim and manifest God’s mercy, concretely and joyfully, by upholding and promoting the dignity of every person.  Without this service to the world and in the world, Christian faith is incomplete.

As Lutherans and Catholics, we pray together in this Cathedral, conscious that without God we can do nothing.  We ask his help, so that we can be living members, abiding in him, ever in need of his grace, so that together we may bring his word to the world, which so greatly needs his tender love and mercy.