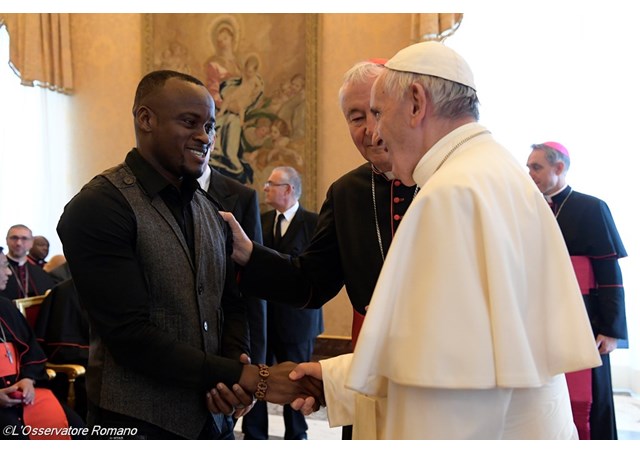 (Vatican Radio) Pope Francis met in the Vatican on Thursday with participants at an international conference on combatting human trafficking. The Santa Marta Group, which organised the two day conference, was established in 2014 to pledge closer cooperation on anti-trafficking initiatives between the Catholic Church and law enforcement agencies worldwide.

At a concluding press conference Cardinal Vincent Nichols of Westminster, one of the founding members of the group, and two survivors of human trafficking spoke of the progress that has been made over the past couple of years.

In his words to the group of bishops and religious, police and security officials, Pope Francis described trafficking as "one of the major challenges of our time" and he praised participants for the important contribution they’re making to end this scourge of modern slavery.

The number of victims, he noted, keeps growing year by year and it’s essential both to support victims of trafficking, but also to tackle the complex problems that lead to their exploitation.

Cardinal Nichols told journalists the group had presented the pope with the a report of positive developments in the 30 countries that are now part of the Santa Marta process...

“Above all perhaps, what this report shows is that human slavery and trafficking is not so hidden as it used to be. There is an increasing awareness that this, in the phrase of the Holy Father, is an open wound in the flesh of humanity, and that voices that were once completely hidden are now being heard”.

Those voices include that of Nigerian survivor Princess Inyang, who was trafficked into Italy in 1999 and forced into prostitution, until she was able to escape, with help from a priest working in the northern city of Asti. She shared her story at the conference and called for deportation of the traffickers, as well as more education and skills training for vulnerable girls in her home country...

“The women are vulnerable because of the poverty in Nigeria, the background of the polygamy system of the families, the non-employment, and now we know that the traffickers go into the rural areas to get these young women because of their serious problems”.

Another survivor, who also works to help others avoid the traffickers, is former Premier League player Al Bangura, originally from Sierra Leone. A keen footballer from an early age, he was tricked into going to England with promises of a dream career. He managed to escape the traffickers and now serves as ambassador for a UK based charity called Sport for Freedom.

“With everything I’ve been through, I want to be out there to share my story, to educate kids and talk to parents who’re desperate for their kids to achieve….we also work with the Premiership… to make sure the kids are going in the rights direction and make sure we stop this slavery thing.”

From Africa to Latin America, from Asia to Europe, the U.S. and the Middle East, the conference heard many encouraging stories of success in combatting the trade in people for prostitution, forced labour or sale of their body parts. But as their report also underlines, there is much frustration too, coupled with a renewed determination to work more effectively together for an end to what Pope Francis himself describes as a “crime against humanity”.