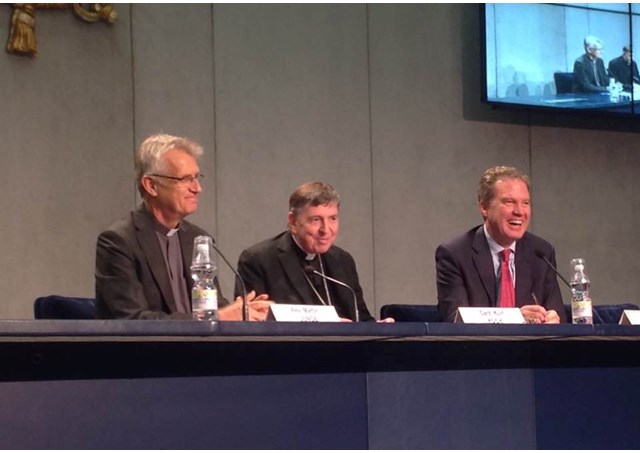 (Vatican Radio) Pope Francis’ visit to Sweden for a joint ecumenical commemoration of the Reformation is a big step forward because Catholics and Lutherans are "no longer defining themselves in opposition to each other", but in communion with one another,

Those were the words of the head of the Holy See press office, Greg Burke, to journalists at a briefing on Wednesday ahead of the Pope’s departure for southern Sweden on Monday October 31st. Pope Francis and the heads of the Lutheran World Federation will be jointly presiding at an ecumenical prayer service in Lund cathedral, followed by a public witness event in the nearby city of Malmö. On the following morning, All Saints Day, the Pope will also celebrate Mass in Malmö for Sweden’s tiny Catholic community.

Also addressing journalists in the Vatican press office about the significance of this unprecedented ecumenical event was the General Secretary of the Lutheran World Federation, Rev Martin Junge, and the head of the Pontifical Council for Promoting Christian Unity, Cardinal Kurt Koch.

The Cardinal and the Lutheran leader looked relaxed and upbeat as they explained the importance of the Pope’s presence in Sweden for this 500th anniversary commemoration. The event comes as the culmination of years of theological progress, from the signing of the Joint Declaration on the Doctrine of Justification in 1999, to the publication of a shared history of the Reformation in the 2013 document ‘From Conflict to Communion’.

From the impossible to the possible

A few years ago, Rev. Junge stressed, the idea of Catholics and Lutheran marking together such a historically divisive event would have seemed simply impossible, yet today it's a powerful sign of Christian witness to our suffering and fragmented world.

“We are working on the last details of what we truly believe is a historic commemoration….. We do this a year ahead of the 500th anniversary, thereby hoping to give a very strong ecumenical signal, that we understand because of our dialogues, because of the trust that has grown among us, because also we have been able to remove some of the obstacles of doctrinal differences among us, that the time is mature, is ripe, to move ‘from conflict to communion’. And this is what we’ll do publically, this is for what we’ll be praying, for God to be with us, this is what we want to encourage our communities, to live out that commitment”.

Asked about those Catholics who question the idea of celebrating the Reformation, Cardinal Koch pointed to the three aspects of the common commemoration: gratitude for the past 50 years of progress, common witness as a sign of hope for the future, but also repentance for the terrible religious conflicts which transformed Europe into “a sea of blood” in the 16th and 17th centuries.

Questioned about the possibility of lifting Luther’s excommunication, the cardinal said that’s not something the Church can actually do, but he pointed to the very many positive statements that recent popes have made in reassessing Luther’s contribution to the understanding of our common Christian faith.

“The Catholic Church cannot lift the excommunication because it’s just finished by the death of a person. But on the other side is what we can say about Luther, and here we have many beautiful things that the popes have said…..the words of John Paul II on his visit in Germany, in Mainz, he said that we can learn many things from Luther. Then we have the beautiful speech of Pope Benedict in Erfurt, where he said the greatest concern of Luther was the question of God, the centrality of the question of God and the Christocentrism are the key concerns in the life and work of Luther and Pope Benedict recongised this very well. This is, for me, more important, what we can say about Luther and what we can learn from the theology and concerns of Luther”.

While theological differences around ministry, the Church and the Eucharist remain, the Cardinal and the Lutheran leader said they hope the events in Sweden will give impetus to new understanding and even new agreements on sharing at the Eucharistic table.