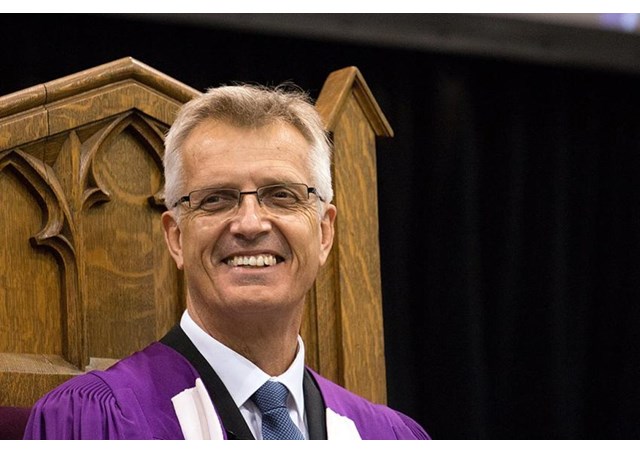 (Vatican Radio) In the face of widespread global conflicts, Pope’ Francis’ visit to the Swedish cities of Lund and Malmö for a joint commemoration of the Reformation will be “a sign of hope” to a divided and suffering world. That's the view of Rev, Martin Junge, General Secretary of the World Lutheran Federation.

On October 31st, the Pope and leaders of the Lutheran World Federation will preside together at a prayer service in Lund cathedral, asking forgiveness for past conflicts and giving thanks for the last 50 years of ecumenical dialogue.

They will then lead a celebration with young people in Malmö arena, focusing on a commitment to common witness and highlighting cooperation on justice, peace and environmental protection between Caritas Internationalis and the World Service network of the Lutheran World Federation.

Rev. Martin Junge believes these events offer Catholics and Lutherans a unique opportunity to show that dialogue does produce concrete results and can offer a powerful message of unity and service to those most in need.

The Lutheran leader says that this joint commemoration “doesn't come out of the blue” but is rather “the result of the longstanding, deep theological dialogues and understanding which we have reached”.

Those results, he adds, are well documented in “very important milestones of the ecumenical process which we have had with the Catholic Church”, such as the 1999 Joint Declaration on the Doctrine of Justification, which Rev Junge describes as “a theological pillar” of the whole joint commemoration.

Secondly, he points to the 2013 joint report from the Catholic-Lutheran Commission on Unity called ‘From Conflict to Communion’ which tells the history of the Reformation from a shared perspective.  That document, he says, identifies theological issues that have been overcome, but also some of the tasks which lie ahead, particularly discussions on ministry, the Church and the Eucharist.

Rev Junge also notes that local Catholic and Lutheran Churches carry “different memories and different experiences”, some of which are “painful and difficult ones”, therefore, he says, “the whole task of the healing of memories” is ahead of us.The Lutheran leader adds there is “a clear pattern” in the way majority and minority Churches relate to each other.

But the “great opportunity of the joint commemoration", he says, is that “we will take up that history - we’re not neglecting it or pushing it aside - we’re acknowledging it, but at the same time we're saying we don’t want to get stuck in history”. Instead, he says, “we want to become and remain open to the common future where God invites us to go” and which we share already through our Baptism. We will together say “we want to turn away from conflict” and work on what we still need to do on the path to full unity.

Speaking about the current conflicts, violence, and breakdown of communications among communities and nations, Rev Junge says the joint commemoration wants to convey a powerful message that “to remain and to sustain dialogue through decades eventually brings fruits”. The powerful message that Catholics and Lutherans can give together, he says, is that of deliberately leaving the conflict behind as they move into a new stage of relationships. That means “not being busy with themselves only, but also being very open and attentive” so that their being together becomes “a resource for others” and “a sign of hope” to a struggling and wounded world.