Pope: urges Christians to reject envy and conflicts and work for unity 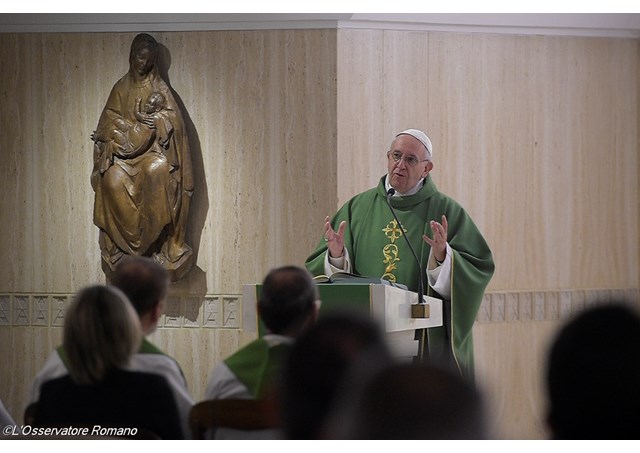 (Vatican Radio) Pope Francis said humility, gentleness and magnanimity are the three key attitudes to build unity within the Church and urged Christians to reject envy, jealousy and conflicts. He was speaking at his Mass celebrated on Friday in the chapel of the Santa Marta residence.

Taking his inspiration from the greeting at Mass “peace be with you,” the Pope focused his homily on what is required to nurture peace and unity and avoid war and conflicts. He said our Lord’s greeting “creates a bond” of peace and unites us to create a unity of spirit and warned that if there’s no peace and if we aren’t able to greet each other in the widest sense of the word, there will never be unity. The Pope explained that this concept applies for unity in the world, unity in the town, in the district and in the family.

“The evil spirit always sows wars. Jealousy, envy, conflicts, gossip…. are things that destroy peace and therefore there cannot be unity. And how should a Christian behave to promote unity, to find this unity?  Paul tells us clearly: ‘live in a manner worthy, with all humility, gentleness and magnanimity.’  These three attitudes: humility - we cannot sow peace without humility.  Where there is arrogance, there is always war and the desire to defeat the other and believing one is superior. Without humility there is no peace and without peace there is no unity.”

Pope Francis lamented how nowadays we have lost the ability to speak gently and instead tend to shout at each other or speak badly about other people.  He urged Christians to rediscover gentleness, saying by so doing, we are able to put up with each other, give mutual support, “be patient and put up with the faults of others or the things we don’t like.”

Help build unity with the bond of peace

“First: humility, second: gentleness with this mutual support, and third: magnanimity: a big heart, a wide-open heart that can accommodate everybody and that does not condemn, that does not become smaller because of trifling things: ‘who said that,’ ‘I heard that,’ ‘who…’ no, a large heart, there is room for everybody. And this creates the bond of peace; this is the worthy manner in which to behave to create the bond of peace which is the creator of unity. The Holy Spirit is the creator of unity but this encourages and prepares the creation of unity.”

“The mystery of the Church is the mystery of the Body of Christ: ‘one faith, one Baptism, one God and Father of all, who is over all’ and who works ‘through all and in all:’ this is the unity that Jesus asked the Father to grant us and we must help create this unity with the bond of peace.  And the bond of peace grows with humility, with gentleness and mutual support and with magnanimity.”