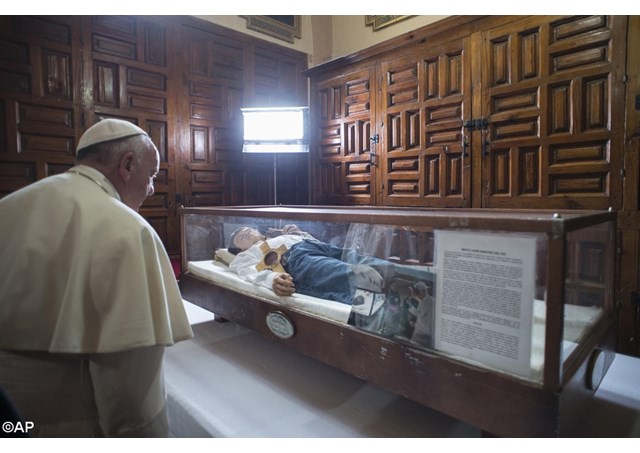 (Vatican Radio) On the morning of Sunday, October 15, Pope Francis presides over Holy Mass for the canonization of seven new Saints.

Two of the new Saints are martyrs:  José Sánchez del Río, a 14-year-old boy who was killed in 1928 in Mexico during the “Cristero” struggle which opposed the government's anti-Catholic and anticlerical policies. Under torture José refused to disown his faith; a handwritten note addressed to his mother and found on his dead body read: “I promise that in heaven I will prepare a place for all of you. Your José dies defending the Catholic faith for the love of Christ the King and Our Lady of Guadalupe”.

The first martyr belonging to the La Salle Order, killed in 1792 during the French Revolution. His name is Salomone Leclercq; he too chose to die in the defense of his faith.

Then there is “Cura Brochero” (José Gabriel del Rosario Brochero), an Argentinean priest “’who smelt of sheep’ and travelled enormous distances on the back of a mule during the 19th century to bring consolation and Jesus' message of salvation to the poorest of the poor.

The Spanish Bishop of Palencia Manuel González García, founder of the Congregation of the Eucharistic Missionaries of Nazareth, the Disciples of Saint John, and the Children of Reparation.  He was known for his strong devotion to the Eucharist and became known as the "Bishop of the Tabernacle". He died in 1940.

Father Lodovico Pavoni of the Italian city of Brescia, founder of the religious congregation ‘Sons of Mary Immaculate’ or ‘Pavonians’. During the industrial revolution of the 19th century he set up an Oratory for Christian education and together with his ‘labourer brothers’ he taught the poor and the marginalized trades and religious education in the belief that improving social conditions would  improve the spiritual life, and improving the spiritual life would improve social conditions..

Alfonso Maria Fusco, a priest from the southern Italian city of Salerno, founder of the Congregation of the Sisters of St. John the Baptist, commonly known as Baptistine Sisters. Their mission was to evangelize, educate and promote youth, especially those who were most poor, abandoned and at risk. He was particularly close to the impoverished and neglected farmers of the South of Italy after the unification of Italy in 1861.

Finally the French Discalced Carmelite mystic and writer Elizabeth of the Trinity who died aged just 26 in 1906 from Addison's disease, which in the early 20th century had no treatment with which to cure or allieviate the suffering of its victims. Even though her death was painful, Elizabeth gratefully accepted her suffering as a gift from God. Her last words were: "I am going to Light, to Love, to Life!"