Pope: hypocrisy is a kind of spiritual schizophrenia 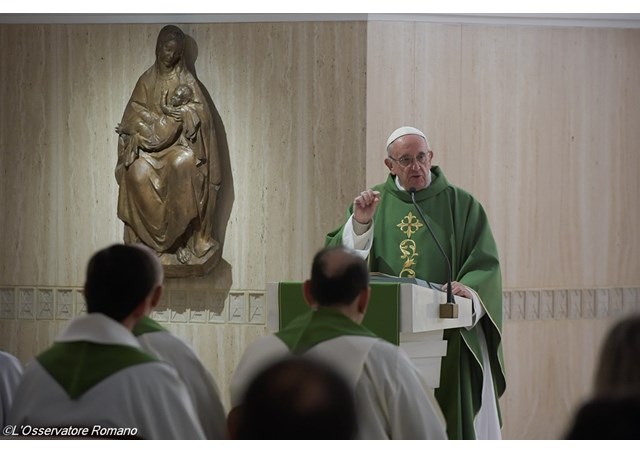 (Vatican Radio) Pope Francis urged Christians to always tell the truth to avoid succumbing to hypocrisy which he described as a kind of spiritual schizophrenia that makes us say many things but without putting them into practice. He was speaking at his Mass on Friday morning celebrated in the chapel of the Santa Marta residence.

In his homily at the Mass, the Pope took his cue from the day’s readings to reflect on the dangers of hypocrisy by warning Christians against the leaven of the Pharisees. Noting that there’s a good leaven and a bad leaven, he said the former builds the kingdom of God whereas the latter only creates the appearance of the Kingdom of God.

Good leaven, said Pope Francis, always rises and grows in a consistent and substantial manner and becomes a good bread, a good pastry. But as he went on to warn, bad leaven does not grow well and he used an anecdote from his own childhood to explain the concept.

“I remember that for Carnival, when we were children, our grandmother made biscuits and it was a very thin, thin, thin pastry that she made. Afterwards she placed it in the oil and that pastry swelled and swelled and when we began to eat it, it was empty. And our grandmother told us that in the dialect they were called lies – ‘these are like lies: they seem big but there’s nothing inside them, there’s nothing true there, there’s nothing of substance.’ And Jesus tells us: ‘Beware of bad leaven, that of the Pharisees.’ And what is that? It’s hypocrisy. Be on your guard against the Pharisees' leaven which is hypocrisy.”

The Pope went on to explain that hypocrisy is when we invoke the Lord with our lips but our heart is distant from Him.

“Hypocrisy is an internal division. We say one thing and we do another. It’s a kind of spiritual schizophrenia. In addition, hypocrisy is a dissembler: they seem good and polite but they have a dagger behind their backs, right? Look at Herod: terrified inside but how politely he received the Magi! And then when he was bidding them farewell, he told them: ‘Go on your way and then come back and tell me where this child can be found so that I can go and worship him!’  To kill him!  He’s a two-faced hypocrite, a pretender.  Jesus when speaking to the doctors of the law, said: these say this and don’t do it:’ this is another type of hypocrisy. It is an existential nominalism: those who believe that by saying the things that everything is done. No. Things must be done not just said. And a hypocrite is a nominalist who believes that by saying it, everything is done. In addition, the hypocrite is unable to accuse him or herself: they never find a stain on themselves, they accuse others.Think about the splinter and the log right? And it’s in this way that we can describe that leaven which is hypocrisy.”

Tell the truth not lies

“How truthful children are when they confess their sins!  Children never ever tell a lie during confession; they never talk about abstract things. ‘I’ve done this, I’ve done that, I’ve done……’ Concrete things. Children talk about concrete things when they are in front of God and in front of other people. Why is that? It’s because they have good leaven, leaven that makes them grow like the Kingdom of God grows. May the Lord give all of us the Holy Spirit and the grace of that lucidity to discern with which leaven I am growing, with which leaven I am behaving. Am I a loyal and transparent person or am I a hypocrite?”