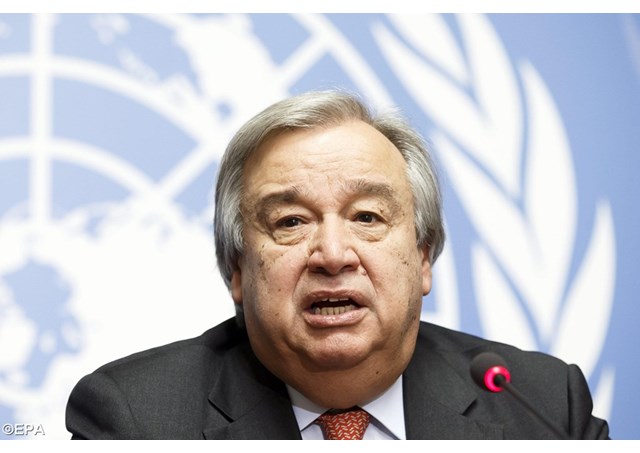 (Vatican Radio)  The United Nations General Assembly on Thursday elected 67 year old António Manuel de Oliveira Guterres to replace outgoing Ban Ki Moon as the world body’s new Secretary General.  In December 2013, Mr. Guterres was here in the Vatican where, as the United Nations High Commissioner for Refugees, he met the newly elected Pope Francis in private audience.  At the time, Guterres was serving his second five year mandate at the helm of the U.N.’s agency for refugees.  He will take over his new job January 1.

As High Commissioner of UNHCR, Guterres headed one of the world's largest humanitarian organizations with more than 7,000 staff working in 126 countries providing protection and assistance to millions of refugees, returnees, internally displaced people and stateless persons. More than 85 per cent of UNHCR staff work in the field, often in difficult and dangerous situations.

Tracey McClure spoke with the former Portuguese Prime Minister following his 2013 meeting with Pope Francis.  She asked him if the Pope’s concerns about what he sees as the “globalization of indifference,” came up in their conversations.  The Pope first used that term early into his pontificate when he visited the Italian island of Lampedusa overwhelmed by thousands of migrants and refugees, many of whom had perished while trying to reach Europe by sea.

Catholic Church puts respect for refugee rights on the agenda

“Indeed,”  Guterres says,  “I believe that first of all since [the beginning],  the Catholic Church has been absolutely impeccable in putting in the agenda the need to respect the rights of refugees, the rights of migrants, the need for societies to be tolerant, for societies to respect diversity and this has been a constant line of advocacy for the Catholic church but I think Pope Francis gave a new dimension to this.  Because not only has he been expressing in a very clear way these positions, I remember his declaration (on) the World Day of Migrants and Refugees, also how this issue is dealt with in Evangelii Gaudium …

Pope Francis’ visit to Lampedusa: a personal engagement in a world of indifference

"But his personal presence in Lampedusa, in that tragic moment when so many people (were) dying in the sinking boats in the Mediterranean, his visit to one of the refugee centers in Rome: the Centro Astalli of the Jesuit Refugee Services… so there is a personal testimony.  It’s not only that there’s a doctrine, there is a personal engagement, a personal testimony and in a world of indifference, but also in a world of disrespect for refugees and migrants, in a world where diversity is (often) not appreciated... in a world where you see xenophobia and racism developing in many societies, people are afraid. "

Voice of Pope enormously important to defeat the voices of populism, intolerance

"And when people are afraid, it is easy for populists and demagogues to convince people that foreigners are to be blamed because there is unemployment, because there is insecurity in our societies - even if it’s obviously not because of refugees that this happens.  The voice of the Pope and the testimony of the Pope have an enormous importance to help us all (and) to help those who struggle for refugee protection to be maintained in our societies, to be able to defeat the voices of populism, the voices of intolerance, the voices of xenophobia that unfortunately – especially in our European continent – have been more and more fierce in the recent past.”

“Obviously, as citizens of the world, we see Pope Francis as a new symbol of hope for many things.  I believe that obviously for the Catholic Church it represents an enormous breath of fresh air that is making a lot of people feel strongly committed also, but for the world in general, it has an enormous influence in a moment that we see that conflicts are multiplying, the international community has lost much of its capacity to prevent conflicts and to solve conflicts.  We see the world unable to address some of the key challenges of our time.  Look at climate change for instance. We see a global lack of leadership.  So to see this kind of committed (engagement) and at the same time humane, deeply human leadership in the Catholic Church, is I think, a fantastic example for the world. And so it’s natural that everybody that feels this enormous strength, (the) energy that comes from the Pope, that everybody would of course, I’m sure, would like to be with him and to be able to (draw in) this energy and this commitment because we all need that in the difficult moments that we are facing.”