The Saint and the Troubadour: John Paul II and Dylan 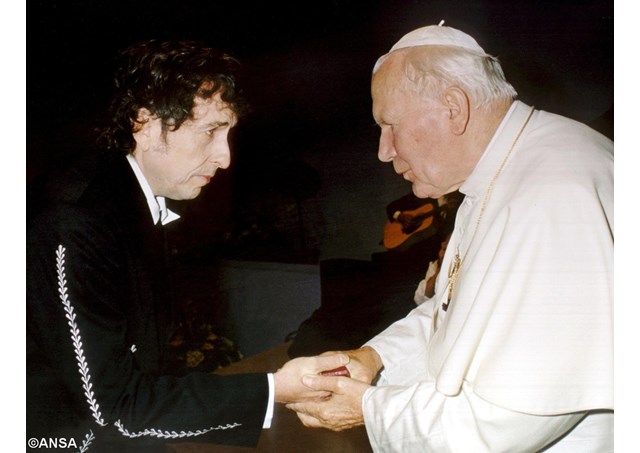 (Vatican Radio) US-born singer-songwriter Bob Dylan on Thursday was named the winner of the 2016 Nobel Prize in Literature.

The Grammy award winning artist was recognized by the Nobel committee for having created "new poetic expressions within the great American song tradition."

One of the more significant events of Dylan’s career was when he played for Pope St. John Paul II at the 23rd Italian National Eucharistic Congress in Bologna in 1997.

During the event, Dylan played the songs Blowin’ in the Wind, Knockin' on Heaven's Door and A Hard Rain's A-Gonna Fall; with Forever Young as an encore.

And this musical set was the basis of the remarks by St. John Paul II.

“A representative of yours has just said on your behalf that the answer to the questions of your life ‘is blowing in the wind’. It is true!” – said the Pope. –  “But not in the wind which blows everything away in empty whirls, but the wind which is the breath and voice of the Spirit, a voice that calls and says: ‘come!’

The then answered one of Dylan’s other most famous questions.

“You asked me: How many roads must a man walk down before you call him a man? I answer you: one! There is only one road for man and it is Christ, who said: ‘I am the way’ (Jn 14:6). He is the road of truth, the way of life,” the Pope continued.

Pope St. John Paul II also took the time to praise song, and spoke about how singing is pleasing to God.

“It invites us to bless his name, to rejoice and be glad together with all creation. Singing thus becomes the response of a heart filled with joy, which recognizes God’s presence beside it,” –  ¬the Pope said –  “The answers are blowing in the breath of the Holy Spirit.”