Pope reflects on Mary as example of being thankful 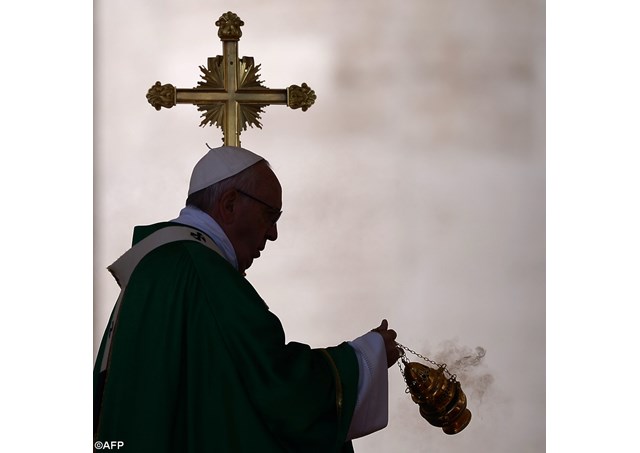 (Vatican Radio) Pope Francis celebrated Mass on Sunday to mark the end of the Marian Jubilee, the latest event in the ongoing Holy Year of Mercy.

In his homily, the Pope reflected on the theme of thanksgiving for the gifts which God has given us.

Pope Francis centered his homily on the Gospel reading from Luke, in which Jesus heals ten lepers, but only one of them returns to thank him.

The nine men Jesus healed, the Pope said, “forgot the Giver, the Father, who cured them through Jesus, his Son made man.”

Meanwhile, the man who returned to thank the Lord was a Samaritan, and therefore a foreigner.

“This man was not content with being healed by his faith,” the Pope said, “but brought that healing to completion by returning to express his gratitude for the gift received.”

“He recognized in Jesus the true Priest, who raised him up and saved him, who can now set him on his way and accept him as one of his disciples.”

The Holy Father challenged the faithful by asking if we are capable of saying “Thank you,” to our families, our communities, or in the Church.

Likewise with God, it is easy to ask him for something, but not to express gratitude, he said.

Pope Francis cited the Marian jubilee as an opportunity to look to Mary as a model for giving thanks to God for things received.

The ability to give thanks also requires humility, the Pope said.

“The heart of Mary,” he said, “more than any other, is a humble heart, capable of accepting God’s gifts.”

The Holy Father invited us to ask ourselves if we are “prepared to accept God’s gifts,” or if we “prefer instead to shut ourselves up within our forms of material security, intellectual security, the security of our plans.”

Pope Francis observed how both Naaman from the day’s first reading and the Samaritans from the Gospel were foreigners.

He added how foreigners, including people of other religions, often “give us an example of values that we sometimes forget or set aside!”

Mary, along with Joseph her spouse, had also experienced being a foreigner during their time in Egypt, the Holy Father said.

He concluded: “Let us cling to this simple faith of the Holy Mother of God; let us ask her that we may always come back to Jesus and express our thanks for the many benefits we have received from his mercy.”