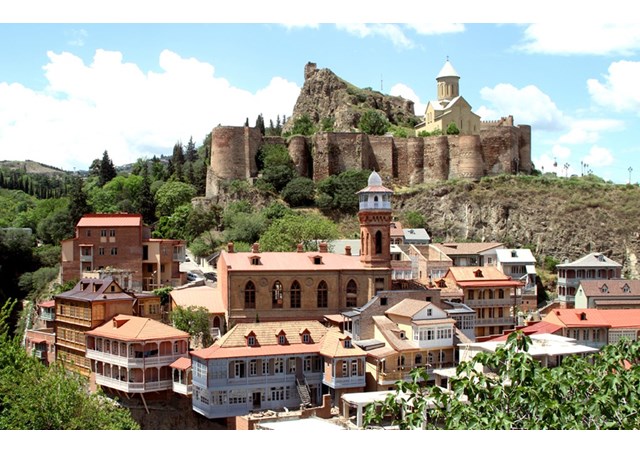 (Vatican Radio)  Pope Francis takes off for the Georgian capital Tbilisi on Friday for a two-day visit to the majority Orthodox republic.

As well as meeting with religious and civil authorities in Tbilisi, the Pope will travel to the nearby ancient city of Mtskheta, founded in the 5th century BC and famed as one of UNESCO’s World Heritage Sites. The former capital contains many important monuments of early Christian architecture for the Caucuses region, including the 11th century Svetitskhoveli Patriarchal Cathedral.

The visit comes 17 years after Pope John Paul II made a landmark trip to the republic, struggling to rebuild as an independent nation following 70 years of Soviet domination.

Dr Tamara Grdzelidze is an Orthodox theologian, now serving as Georgia’s ambassador to the Holy See. Ahead of the papal visit, she sat down with Philippa Hitchen to talk about expectations for the trip and about the historical difficulties between the Catholic and Orthodox Churches in her country…

The ambassador begins by saying that Pope Francis “brings joy to every place he goes so I hope he’ll do this in Georgia as well!” She hopes he will speak to the hearts of Georgians to help them understand the “wisdom and spiritual joy he carries with him”. At the same time, she underlines the significance for the Pope to visit one of the oldest Christian countries in the world.

Speaking of the origins of the Church in the 4th century by a woman known as Nino, she said “It’s a very special start of Christian life in Georgia”. She explains that Nino was a young woman from Cappadocia, who first converted the queen and the king, enabling Christianity to became the official religion of the state.

“Difficult” is the way the ambassador describes the relationship between Orthodox and Catholics in her country, in large part because of the legacy of Soviet culture which still hangs over the nation a quarter of a century after independence. At that time, she says, the Orthodox Church suddenly became independent and has been trying to act as “a national symbol” which puts the Catholic Church “in a difficult position”. On the other hand, she insists, there are many examples of good relationships and good cooperation between the two Churches.

Asked about the ecumenical expectations of this visit, the ambassador notes the way in which Pope Francis “tries to bring on board Christians from all traditions” as he has done through his “renewing of dialogue with the world” on the issue of environmental protection. She points to the many efforts he has made over the past year to reach out to Orthodox leaders, from his meeting with Patriarch Kirill in Cuba, to his visit to Lesbos with Patriarch Bartholomew and the Archbishop of Athens. “He’s trying very much to have good personal relationships with Orthodox leaders” she says, some of whom find it “problematic to talk about doctrinal unity”.

Georgia’s Patriarch Ilia II, the ambassador notes, has enormous influence over people and is “an enormously credible leader” who has led the Church since 1977. She notes how he has “literally renewed the Church life”, she says, in particular pointing to the new flourishing of monastic life, and religious publications which are “all accredited to his leadership”.

Speaking of Church-State relations in Georgia, Ambassador Grdzelidze says “constitutionally the Church is separate from the State”, yet the Constitution also recognizes the special role of the Orthodox Church in the nation’s history. She also mentions the trend of giving compensation to the Church for the deprivations its members suffered during the communist era.