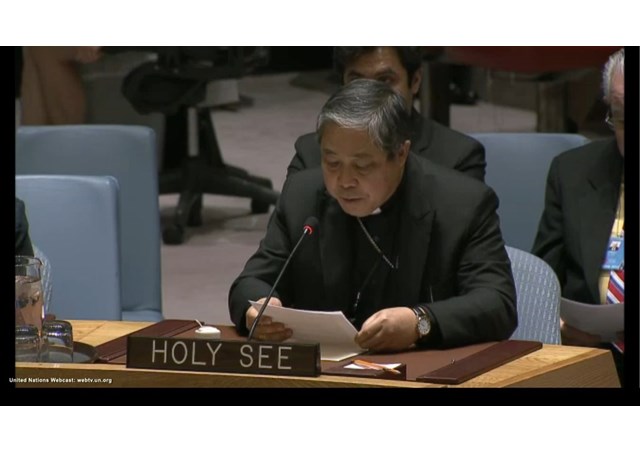 (Vatican Radio) The Vatican told the United Nations on Monday “nuclear arms offer a false sense of security, and that the uneasy peace promised by nuclear deterrence is a tragic illusion.”

“Nuclear weapons cannot create for us a stable and secure world,” said Archbishop Bernardito Auza, the Permanent Observer of the Holy See to the United Nations.

He was speaking at an event marking the International Day for the Total Elimination of Nuclear Weapons.

“Peace and international stability cannot be founded on mutually assured destruction or on the threat of total annihilation,” the Vatican diplomat said.

The full statement of Archbishop Auza can be found below

at the High-level plenary meeting to commemorate and promote

The International Day for the Total Elimination of Nuclear Weapons

The  Holy  See  fervently  hopes  that  this  annual  commemoration of the International Day for the Total Elimination of Nuclear Weapons will contribute to breaking the deadlock that has beset the United Nations’ disarmament machinery for far too long now.

In February 1943, two years and a half before the Trinity test, Pope Piu XII had already voiced deep concern regarding the violent use of atomic energy.  After Hiroshima and Nagasaki  and  given  the  totally uncontrollable and indiscriminate consequences of nuclear weapons, Pope Pius XII demanded the effective proscription and banishment of atomic warfare, calling the arms race a costly relationship of mutual terror. The Holy See has maintained this position ever since the advent of nuclear weapons.

My delegation believes that nuclear arms offer a false sense of security, and that the uneasy peace promised by nuclear deterrence is a tragic illusion. Nuclear weapons cannot create for us a stable and secure world. Peace and international stability cannot be founded on mutually assured destruction or  on the threat of total annihilation. The Holy See believes that peace cannot be solely the maintaining of a balance of power. On the contrary, as Pope Francis affirmed, “Peace must be built on justice, socio-economic development, freedom, respect for human rights, the participation of all in public affairs  and the building of trust between peoples.”

Lasting peace thus requires that all must strive for progressive and concerted nuclear disarmament.

The Holy See has been a Party to the Nuclear Non-Proliferation Treaty (NPT) since the very beginning, in order to encourage nuclear possessing States to abolish their nuclear weapons, to dissuade non-nuclear possessing States from acquiring or developing nuclear capabilities, and to encourage international cooperation on the peaceful uses of nuclear material. While firmly believing that the NPT remains vital to international peace and security and regretting deeply our collective failure to move forward with a positive disarmament agenda, the Holy See will continue to argue against both the possession and the use of nuclear weapons, until the total elimination of nuclear weapons is achieved.

Indeed, the Holy See considers it a moral and humanitarian imperative to advance the efforts towards the final objective of the total elimination of nuclear weapons. Disarmament treaties are not just legal obligations; they are also moral commitments based on trust between States, rooted  in  the  trust  that  citizens place in their governments. If commitments to nuclear disarmament are not  made in good faith and consequently result in breaches of trust, the proliferation of such weapons would be the logical corollary.

For our own good and that of future generations, we have no reasonable or moral option other than the abolition of nuclear weapons. Nuclear weapons are a global problem and they impact all  countries and all peoples, including future generations. Increasing interdependence and globalization demand that whatever response we make to the threat of nuclear weapons be collective and concerted, based on reciprocal trust, and within a framework of general and complete disarmament, as Art. VI of the NPT demands. Moreover, there is the real and present danger that nuclear weapons and other arms of mass destruction would fall into the hands of extremist terrorist groups and other violent non-state actors.

The 2030  Agenda for Sustainable Development calls upon all of us to embark on the implementation of the daunting ambition to better every life, especially those who have been and are left behind. It would be naïve and myopic if we sought to assure world peace and security through nuclear weapons rather than through the eradication of extreme poverty, increased accessibility to healthcare and education, and the promotion of peaceful institutions and societies through dialogue and solidarity.

No one could ever say that a world without nuclear weapons is easily achievable. It is not; it is extremely arduous; to some, it may even appear utopian. But there is no alternative than to work unceasingly towards its achievement.

Let me conclude by reaffirming the conviction that Pope Francis expressed in his December 2014 message to  the  President  of  the  Vienna  Conference on the Humanitarian Impact of Nuclear Weapons: “I am convinced that the desire for peace and fraternity planted deep in the human heart will bear fruit in concrete ways to ensure that nuclear weapons are banned once and for all, to the benefit of our common home.”