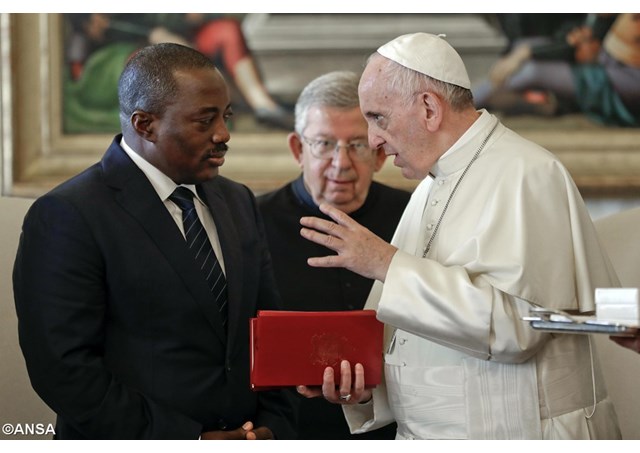 (Vatican Radio)  Pope Francis received Monday in audience in the Vatican Apostolic Palace, the president of the Democratic Republic of the Congo, His Excellency Joseph Kabila, who subsequently met with His Excellency Archbishop Paul Richard Gallagher, secretary for Relations with States.

In a statement, the Holy See's Press Office said during the "cordial discussions,"  the good relations between the Holy See and the Democratic Republic of the Congo were evoked, "with particular reference to the important contribution of the Catholic Church in the life of the nation, with its institutions in the educational, social and healthcare spheres, as well as in development and the reduction of poverty. In this context, mutual satisfaction was expressed for the signing of the framework Agreement between the Holy See and the State, which took place on 20 May this year."

Particular attention was paid, the comunique continues, "to the serious challenges placed by the current political challenge and the recent clashes that have occurred in the capital. Emphasis was placed on the importance of collaboration between political actors and representatives of civil society and religious communities, in favour of the common good, through a respectful and inclusive dialogue for the stability of peace in the country."

Finally, the Parties focused on the persistent violence suffered by the population in the east of the country, and on the urgency of cooperation at national and international levels, in order to provide the necessary assistance and to re-establish civil co-existence.

Watch a video report of the Pope's meeting with President Kabila: