New rules for miracles at Congregation for Saints 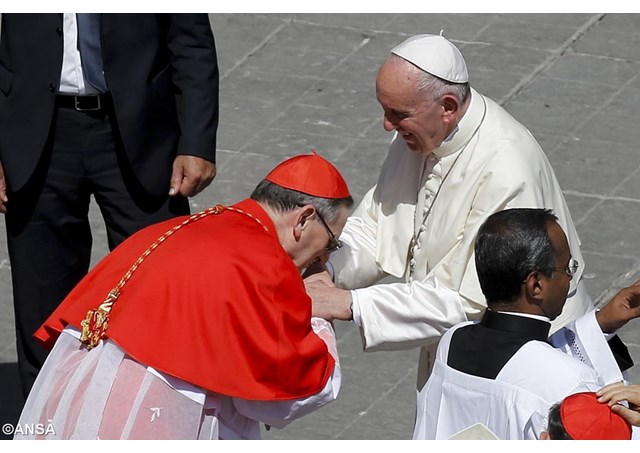 (Vatican Radio) The Cardinal Secretary of State, Pietro Parolin, under the mandate of Pope Francis, has approved new Regulations for the Medical Board of the Congregation for the Causes of Saints.

The Regulations were published on Friday, signed by Cardinal Angelo Amato, the Prefect of the Congregation for the Causes of Saints, and Archbishop Marcello Bartolucci, secretary of the same dicastery.

In a brief introduction it is explained that the miracle required for the beatification of Venerable Servants of God and for the canonisation of Blesseds has always been examined with the utmost rigour. Already in medieval times consultation was sought from medical experts for whom, on 17 September 1743, a specific Order was created by Benedict XIV. More recently, Pious XII instituted, at the Congregation of Sacred Rites, on 20 October 1948, a Commission of Doctors to which he added, on 15 December 1948 a special Medical Council.

On 10 July 1959 John XXIII unified these two bodies to form a Medical Board, approved by the Regulation. In the light of new demands and on the basis of the Apostolic Consultation Sacra Rituum Congregatio of 8 May 1969, a further revision of the provisions of the Regulation was undertaken, and approved by Paul VI on 23 April 1976.

The promulgation of John Paul II’s Apostolic Constitution Divinus perfectionis Magister on 25 January 1983 and the experience of recent years on the part of this Congregation have demonstrated the need to further update the Regulation of the Medical Board. To this end, revised provisions of the Regulation of the Medical Board of the Congregation for the Causes of Series have been drafted.

The current text, explains Archbishop Bartolucci, “is inspired by the previous Regulation approved by Paul VI on 23 April 1976 and, aside from the linguistic and procedural updating, introduces some new elements, such as: the qualified majority, to proceed ad ulteriora to the examination of a presumed miracle, is at least 5/7 or 4/6; the case cannot be re-examined more than three times; for the re-examination of the presumed miracle a Board of nine members is required; the mandate of the president of the Board can be renewed only once (five years, plus another five year term); all those who are occupied with a presumed miracle (promoters of the cause, tribunal, postulators, experts, officials of the Dicastery) are held to secrecy; remuneration for experts shall be paid only via bank transfer; and the under-secretary shall perform for miracles the functions that the Apostolic Constitution Divinus perfectionis Magister attributes to the Relator.”

“The purpose of the Regulation can be none other than the good of the Causes, which can never neglect the historical and scientific truth of the alleged miracles. Just as it is necessary for the legal checks to be complete, convergent and reliable, it is also necessary that their study be performed with serenity, objectivity and sure competence by highly specialised medical experts and then, at a different level, by the Congress of theological consulters and by the Session of cardinals and bishops, eventually reaching the decisive approval of the Holy Father, who has the exclusive competence of acknowledging an extraordinary event as a true miracle. This Regulation obviously concerns only the good functioning of the Medical Board, whose task appears increasingly delicate, demanding and, thanks be to God, appreciated both inside and outside the Church.”