Pope: War is shameful, prayers to ‘God of peace’ in Assisi 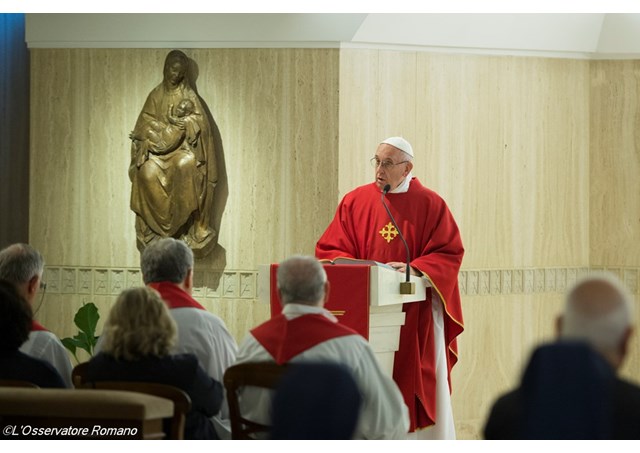 (Vatican Radio)  The world needs to go “beyond the divisions of religions,” and feel the “shame” of war, without turning a “deaf ear” to the cries of those who are suffering: that’s what Pope Francis said in his Homily at Mass at Santa Marta Tuesday morning.  The Holy Father was speaking just hours before he was to leave for the Umbrian hill town of Assisi where he was to take part September 20, 2016 in the closing ceremony of an international summit of interfaith leaders to pray for world peace.  The first such gathering in Assisi was convened by Pope St. John Paul II in 1986.

"There is no god of war". War, the inhumanity of a bomb that explodes, killing and injuring people, and cutting off humanitarian aid so that it cannot get to children, the elderly, the sick, is uniquely the work of “the evil one” who "wants to kill everyone," said the Pope.  For this, it is necessary for all faiths to pray, even cry for peace - united in the conviction that "God is a God of peace."

Do not turn a deaf ear: the world is suffering!

At the start of his Homily, Pope Francis observed, "today, men and women of all religions, we will go to Assisi - not to make a show: simply to pray and to pray for peace.” He recalled his letter to all the bishops of the world  calling on them to organize prayer meetings on this day, inviting “Catholics, Christians, believers and all men and women of good will , of any religion, to pray for peace,"  because, he exclaimed, " the world is at war! The world is suffering! "

War begins in the heart

“We do not see" the war, Francis maintained. "We are scared"  by "some act of terrorism" but "this has nothing to do with what is happening in those countries, in those lands where the bombs, day and night,  fall and fall" and "kill children, the elderly, men, women…"  "The war is far away?"  asked the Pope. "No! It’s very close" because "the war touches everyone…war begins in the heart ."

"May the Lord grant us peace in our hearts,” Pope Francis prayed.  May He “take away all desire for greed, covetousness, for fighting. No! Peace, peace!” the Pope exclaimed again.  So that “our heart is the heart of a man or woman of peace. And beyond the divisions of religions: everyone, everyone, everyone! Because we are all children of God. And God is the God of peace. There is no god of war.  He who makes war is evil; it is the devil who wants to kill everyone. "

We should feel the shame

Faced with this, there can be no divisions between faiths, Francis insisted. It is not enough to simply thank God because maybe the war "does not affect us."  Let us be grateful for this, yes, added the Pope,  “but we must also think about the others" who are being affected by it.

We think today not only about the bombs, the dead, the wounded; but also about the people - children and the elderly – for whom humanitarian aid has yet to arrive so they can eat. Medicines cannot arrive. They are hungry, sick! Because the bombs are preventing the aid from getting to them. And, while we pray today, it would be nice if all of us were to feel ashamed. Ashamed of this: that humans, our brothers, are capable of doing this. Today, a  day of prayer, penance, crying for peace; a day to hear the cry of the poor. This cry that opens the heart to compassion, to love and saves us from selfishness.