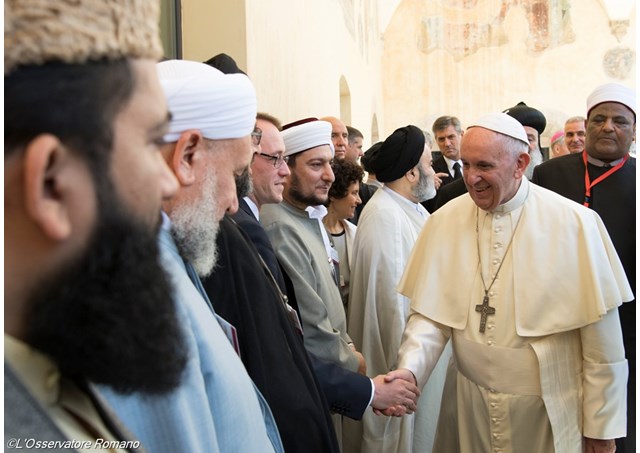 (Vatican Radio)  Muslim, Jewish, Christian and Buddhist religious leaders applauded the “Spirit of Assisi” in interreligious meetings launched by Pope St. John Paul II thirty years ago in the Italian hill town.  At the conclusion of a four day peace summit of interfaith leaders in Assisi, representatives who addressed the gathering thanked Pope Francis for, in the words of the Muslim representative from Indonesia, “his endless commitment for peace.” Pope Francis arrived in Assisi Tuesday morning to attend the final day of the meeting, organized by the Sant Egidio lay community.

Din Syamsuddin, Chairman of the Advisory Council of the Indonesian Council of Ulama, expressed “high appreciation” to the lay Community of Sant’Egidio for “having kept alive the spirit of Assisi” by organizing the event each year.  Noting that Indonesia is the world’s most populous Muslim country, Chairman Syamsuddin said the cooperation “has brought concrete fruits of peace such as our common work in interfaith dialogue, peace education among youth, peace process and conflict resolution in Mindanao, South Philippines.”

The gathering each year has helped moreover, he added, “to materialize our common ideals for peaceful coexistence and collaboration.  To say, and to show, with concrete actions, that violent extremism in the name of religion is indeed misuse and even abuse of religion. Never violence can use the name of religion, never!”

The Spirit of Assisi, he insisted, “is the true dialogue of life that should be continued for the sake of our world,” and he added, “we want to strengthen our commitment for this noble cause.  Let’s walk together in unity and diversity on the path to peace.”

Jewish Rabbi: despite diversity, it is possible to become friends and live in peace

In his remarks, Rabbi Brodman, Chief Rabbi of Savyon, Israel, recalled his own childhood at a Nazi concentration camp, and his frequent talks to young people today “because [he] who does not know history is condemned to repeat it.”  The Spirit of Assisi, he affirmed, “is the best example for humility and holiness and it is the answer to the tragedy of the Shoah and of every war.”

In Assisi, he stressed, “we say to the world that it is possible to become friends and to live together in peace, even if we are different.”  With the courage of dialogue, he said, conflicts can be prevented and a human world created “where everybody can recognize in others the image of God.”

In an ecumenical prayer ceremony in Assisi, the Archbishop of Canterbury, Justin Welby reflected on the misconception in today’s world that money makes one rich:  “We think ourselves rich.  Our money and wealth is like the toy money in a children’s game: it may buy goods in our human economies which seem so powerful, but in the economy of God it is worthless.  We are only truly rich when we accept mercy from God, through Christ our Saviour.”

And, he offered this consideration about Europe:  “The greatest wealth in European history has ended in the tragedies of debt and slavery.  Our economies that can spend so much are merely sandy foundations.  Despite it all, we find dissatisfaction and despair: in the breakdown of families; in hunger and inequality; in turning to extremists.  Riddled with fear, resentment and anger, we seek ever more desperately, fearing the stranger, not knowing where to find courage.”

God, he said, “offers wealth that is real and will bring satisfaction.” In order to receive God’s mercy, one must listen to the “most helpless and the poorest;” eat “above all in the Eucharist, in sharing the body and blood of Christ;” come to the Lord and trust in His mercy. “When we receive mercy and peace,” he said, “we become the bearers of mercy and peace.”

Ecumenical Patriarch Bartholomew I: need for examination of conscience

In his remarks, the Patriarch Archbishop of Constantinople said peace “needs a few cornerstones to uphold it even when it is endangered.”

He also said peace comes from “mutual knowledge and cooperation”, and spoke of the need for the leaders gathered in Assisi to revive these.

“We need to be able to ask ourselves where we may have been wrong, or where we have not been careful enough; because fundamentalisms have risen, threatening not only dialogue with others, but even dialogue within our own selves, our very own consciences. We have to be able to isolate them, to purify them, in the light of our faiths, to transform them into richness for all,” he said.

Buddhist priest:  prayers and dialogue a “shortcut to peace”

91 year old Koei Morikawa Tendaizasu, Supreme Priest of the Tendai Buddhist Denomination of Japan described being able to pray with world religious leaders at these interfaith meetings as “one of the most joyous occasions” of his life.

“History has shown us that the peace attained by force will be overturned by force,” he observed.  “We should know that prayers and dialogue are not the long way but the shortcut to peace…We cannot, however, overlook the current world movements which separate dialogue from unity and cooperation and demand isolation and power.”

“In order to create a world with virtue where abhorrence exists and with love where hatred exists, we clergy must pray together hand in hand and continue to do our very best.”

Victim of Syrian war: Before, there was no difference between Christians and Muslims

One of the many victims of conflict attending the summit, Tamar Mikalli described being heartbroken when saying the name of her home city of Aleppo, Syria.

“I remember my many Muslim and Christian friends.  Now distinctions are made between Christians and Muslims, but before the war there was no difference.  Everyone practiced his or her own religion, in a land that formed a mosaic through different cultures, languages and religions.”

“When the heavy bombings were close to our houses,” she said, “we met with our neighbours, sharing bread and water, the most precious goods that go missing during wartime.  We encouraged each other and prayed.”  She explained how she and her family escaped to Lebanon and then finally were given refuge in Italy where they are doing their best to integrate, and asked for prayers “for peace and love to return to Syria and all over the world.”

Archbishop of Assisi:  need for a “world-scale policy of brotherhood”

Archbishop of Assisi, Domenico Sorrentino, described the interfaith summit as offering “a spirit of prayer, understanding, and peace that aims at being an answer in a world darkened by many wars. Wars that sometimes, improperly, even blasphemously and in satanic ways, weave religious banners.”

Addressing Pope Francis, Archbishop Sorrentino said, “during this year…you have taught us to live this culture of peace as the culture of mercy. That is a culture of love, capable of caring, of being moved, and of forgiving, according to the Evangelical beatitude: “Blessed are the merciful, for they will be shown mercy”.

By practicing and testifying to our religious beliefs and by respectfully listening to those of others during such meetings, he said, “we have experienced true friendship.”

“But we need to go further. Our friendship must turn into a contribution for a world-scale policy of brotherhood.”

“Is it possible,” he asked, “for humanity to perceive itself as one single family? We believers think it is possible. This is the motive for our work, while we search for what unites us together and disregard what divides us.”